Home / Commissioned Works
“Mt. Room Redux”
Oil/canvas
6’ x 8’
2022
This painting of Mt. Rainier was painted for my son.  He is gradually taking on more and more responsibility for running his mother’s business.   The business is a private event space in the historic Rainier Brewery and more specifically what was in their old tasting room.  The room was called the Mt Room because it featured a large oil painting of Mt Rainier.  The painting has long since disappeared.    So I painted a new one for Sam.
Instead of attempting to replicate the old painting from photos, I decided to do the painting closer to the manner of Sam’s graphitti art. To be sure, I used oil paint and brushes.   But I painted it with deliberate speed and as much youthful braggadocio as my 61 year old bones could muster.
Was this the old bull trying to out do his son at his own game?   Or a father trying to honor and gift his son to show respect for his recent leap in maturity…spending more time developing a business and less time defiling others’ property?    Hard to say.   Probably some of all of that.
Whatever my motivations, the painting is clearly fresh and satisfying to look at at.   And, perhaps most importantly, Sam loves it.  And whatever else I may have felt while painting it, that makes me very happy. 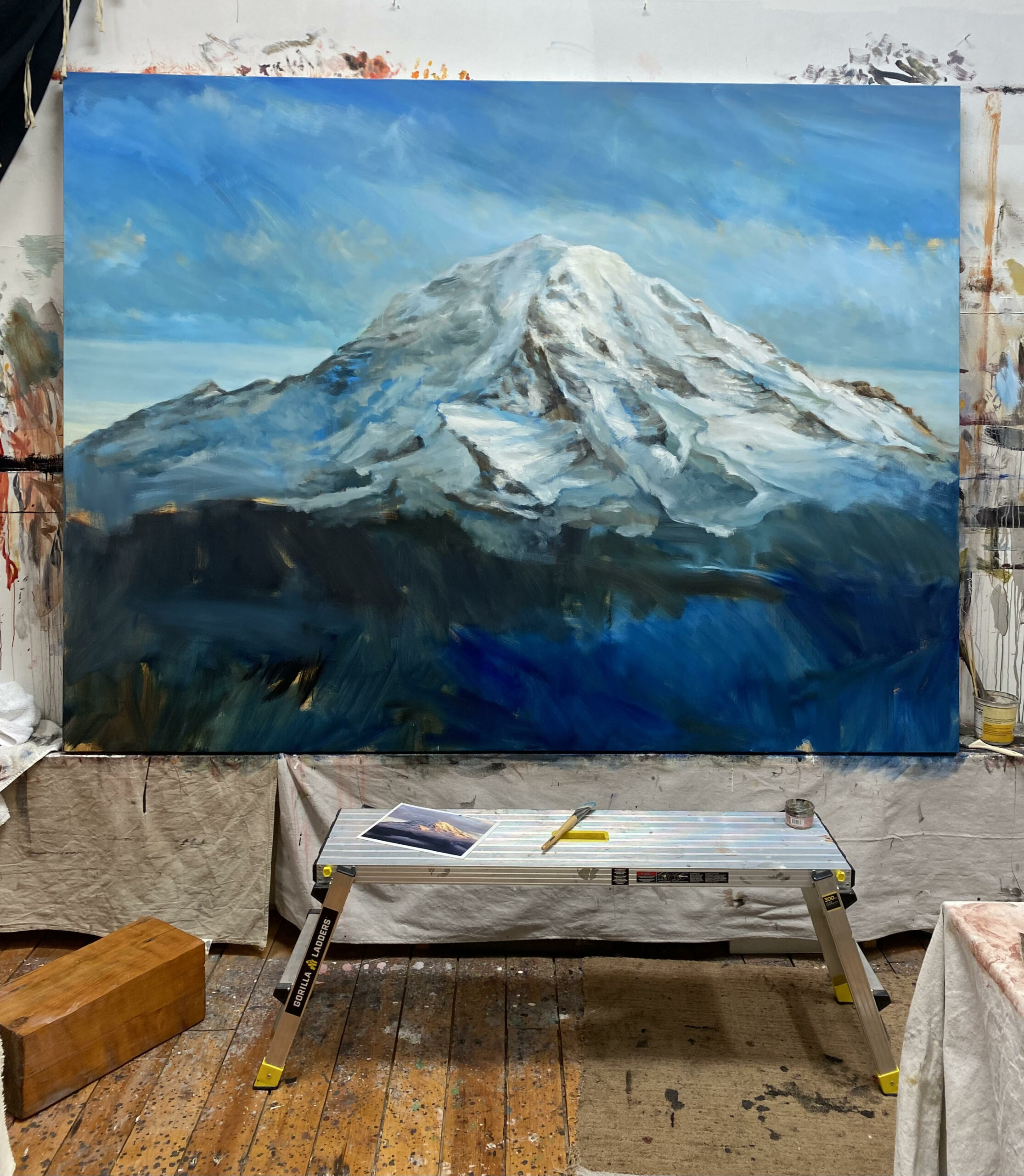 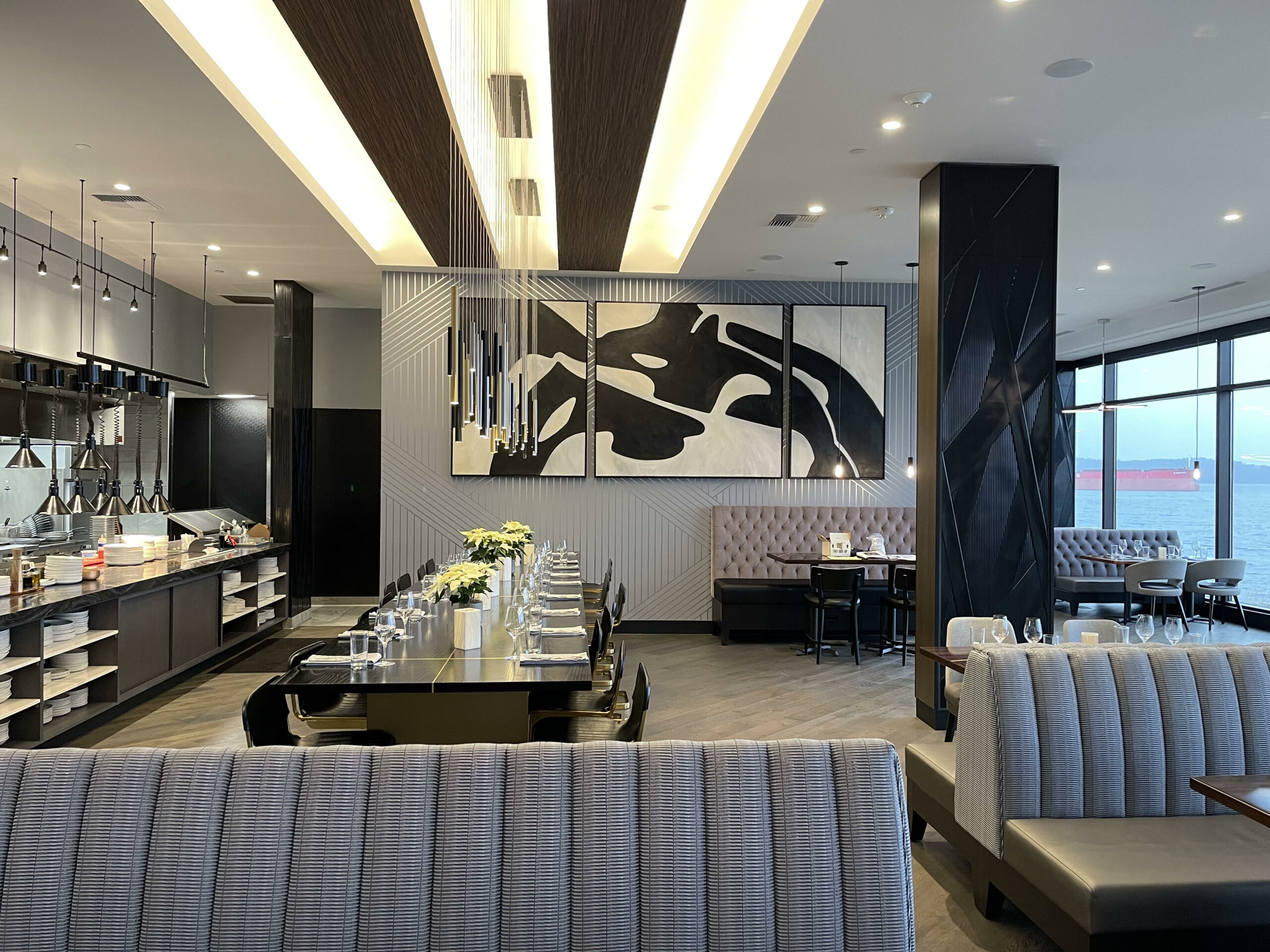 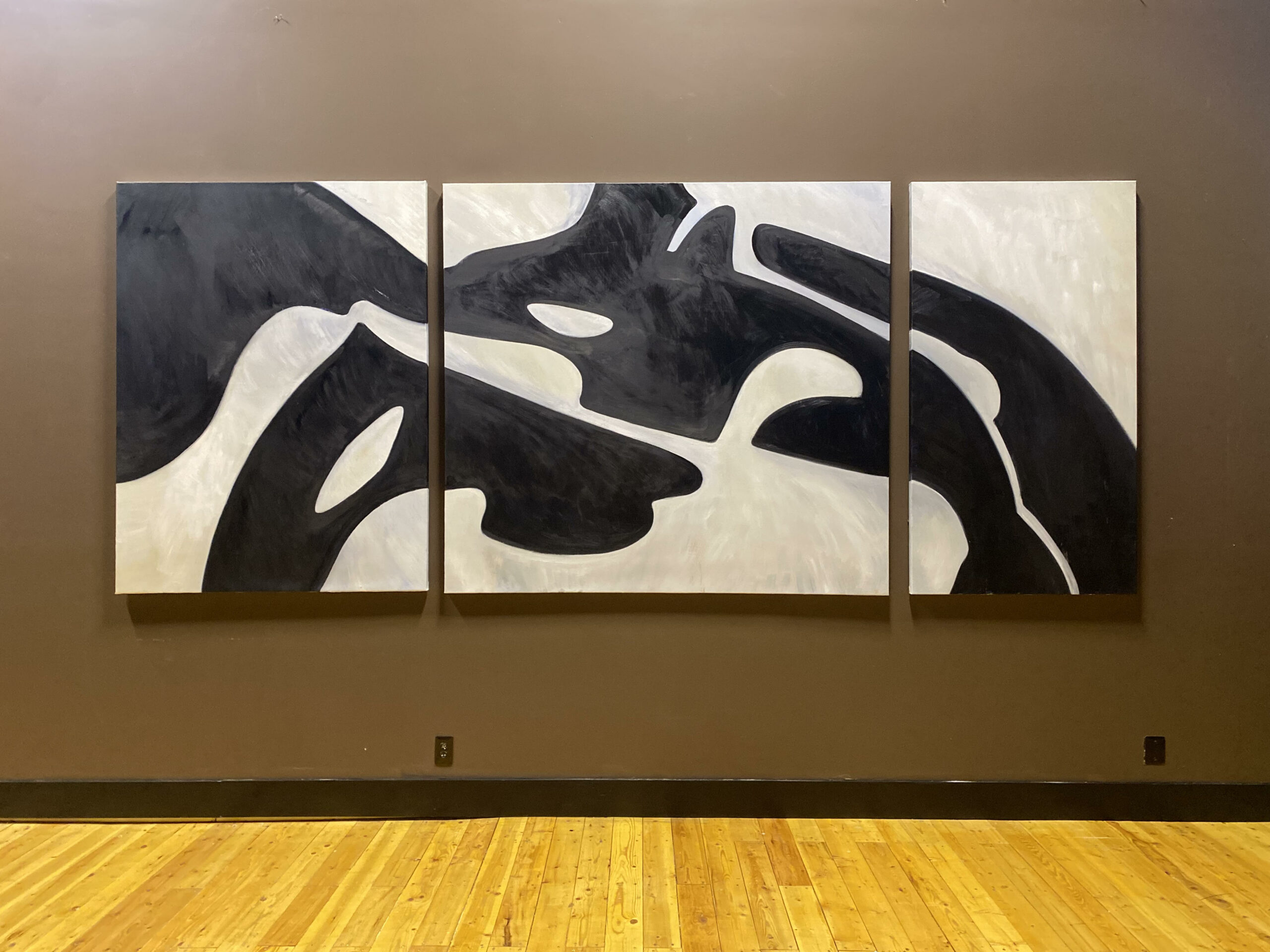 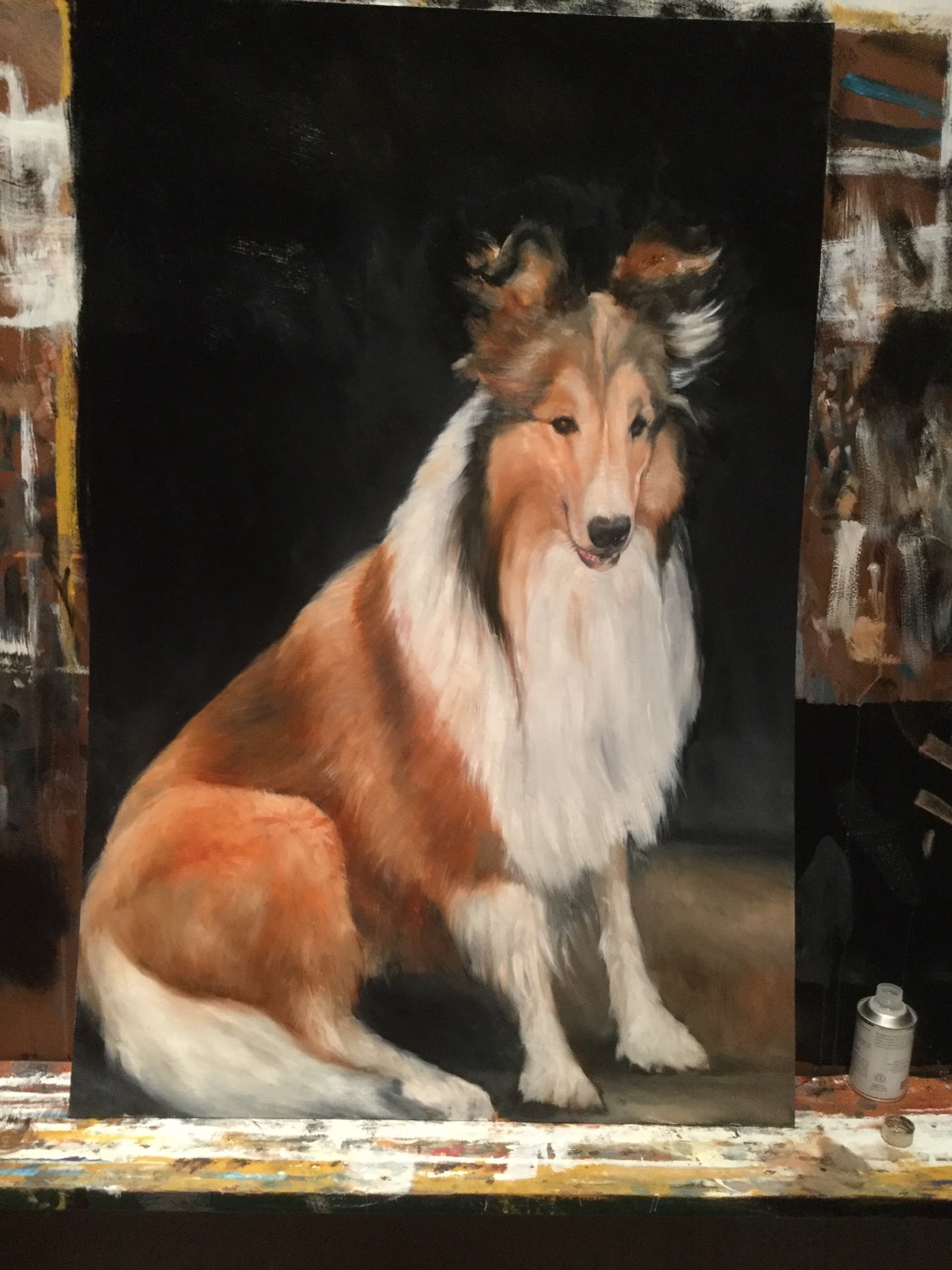 “Fishing Boat”
Oil on 3 canvases.
Total dimensions:  14’ x 4’
2018
“Tacoma Smelter”
Oil/canvas
5’ x 8’
2017
This painting was commissioned for a restaurant near where this historic landmark exits.   The people who commissioned it wanted the painting to look like an old fashioned tinted black and white photograph. 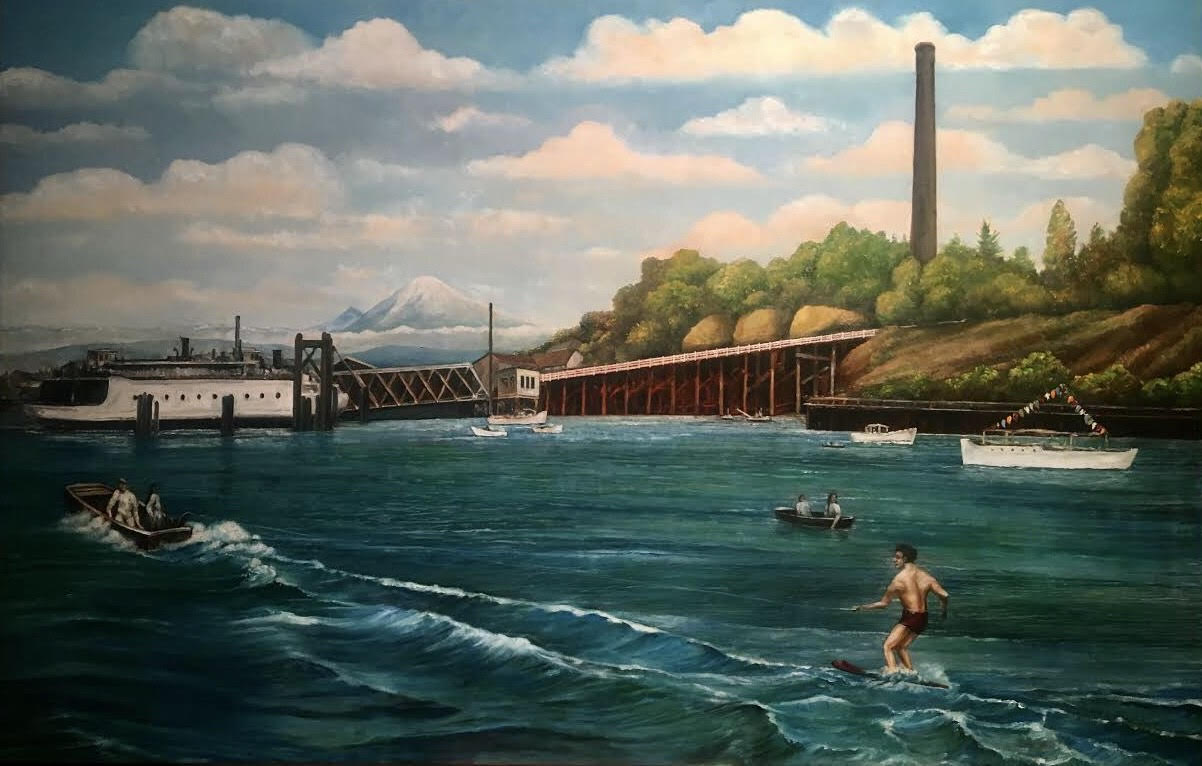 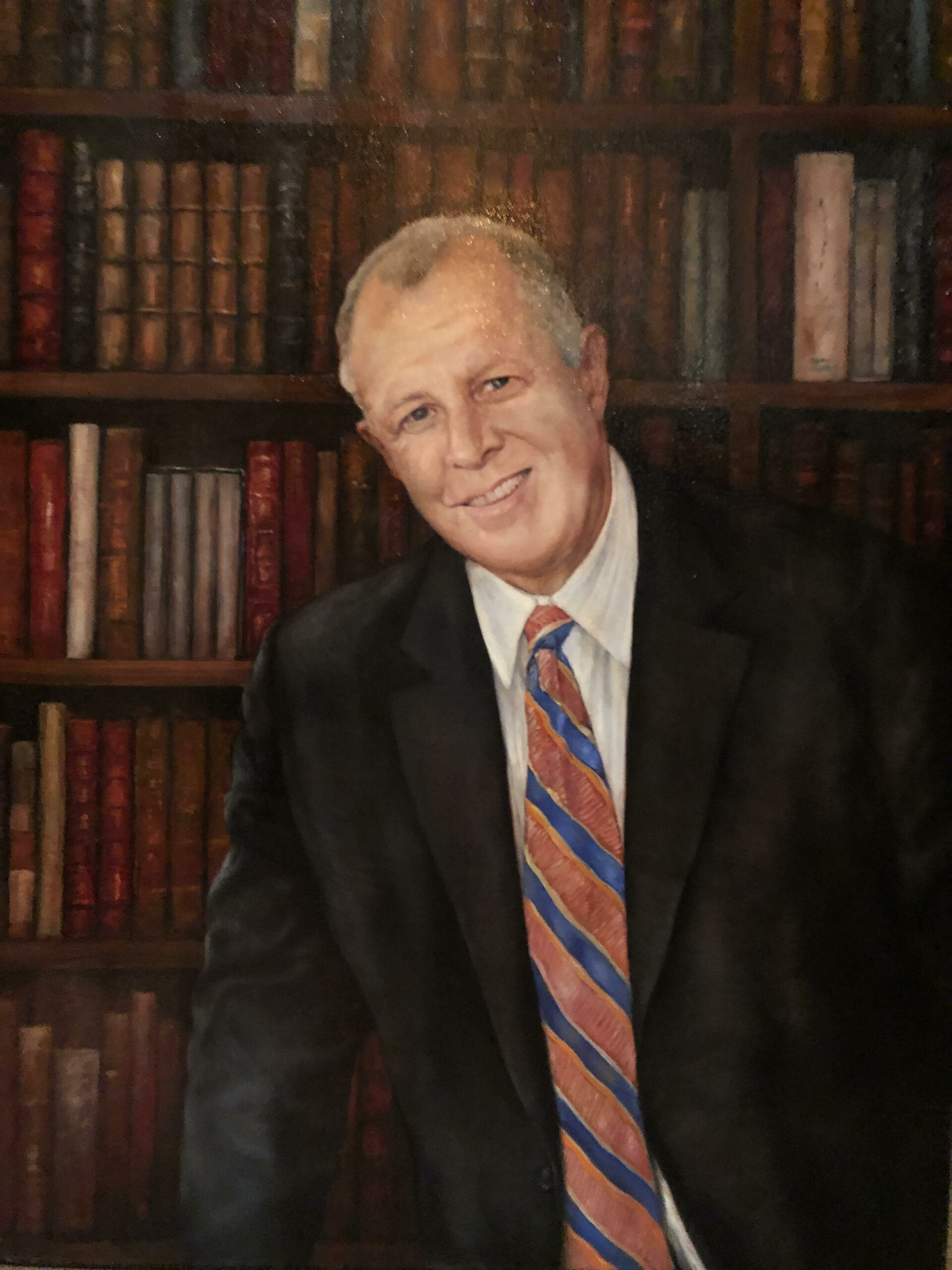 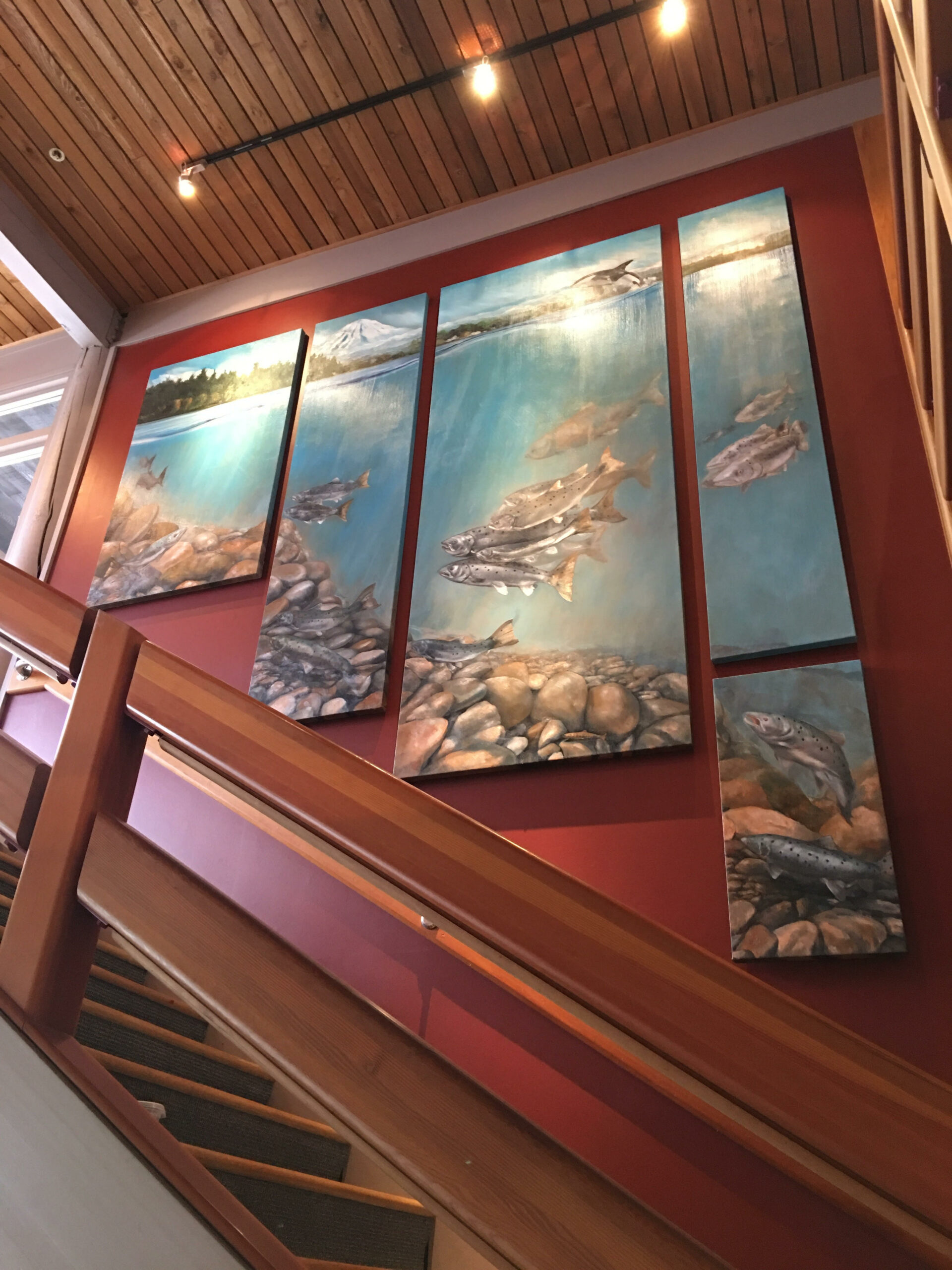 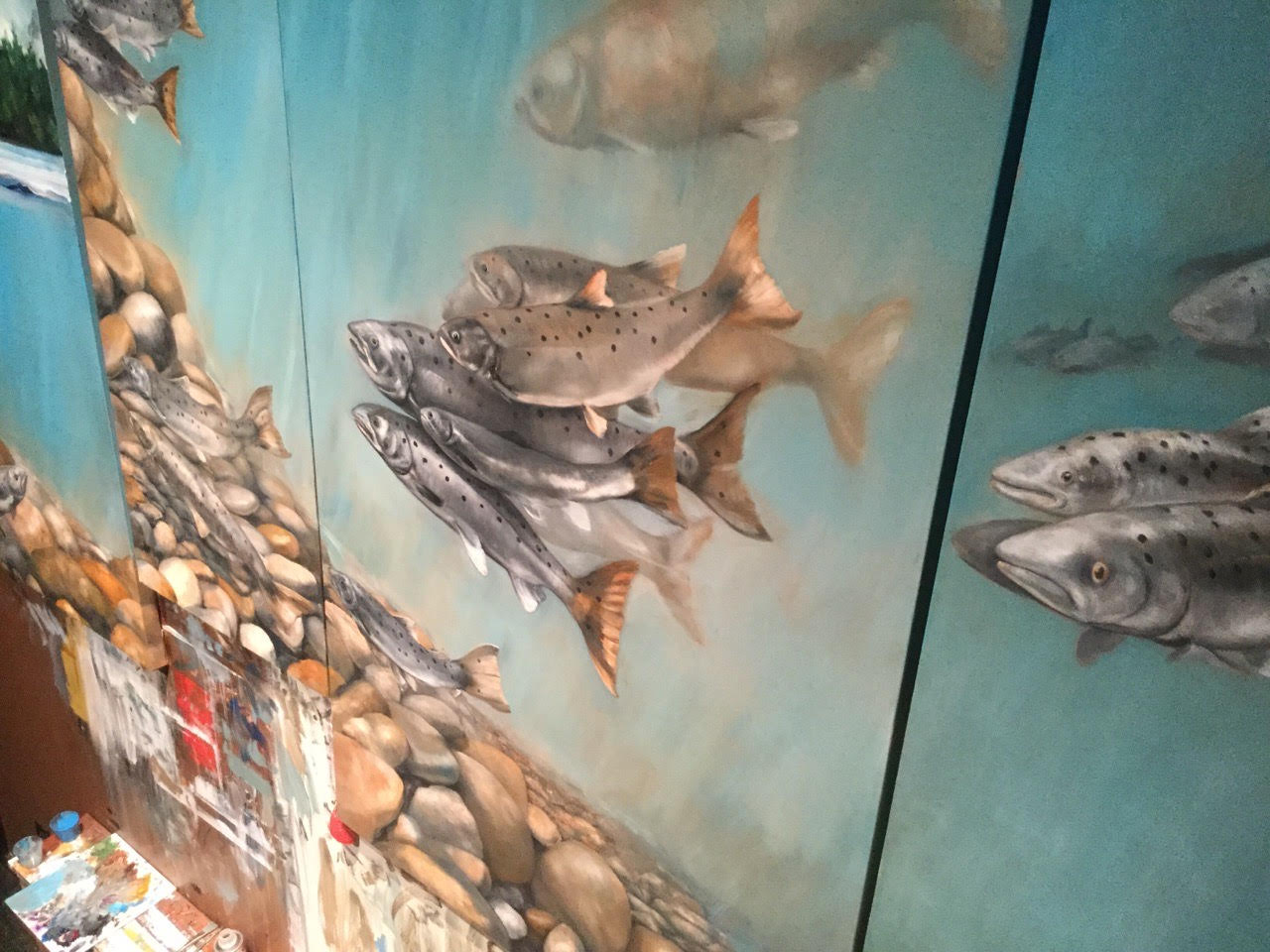 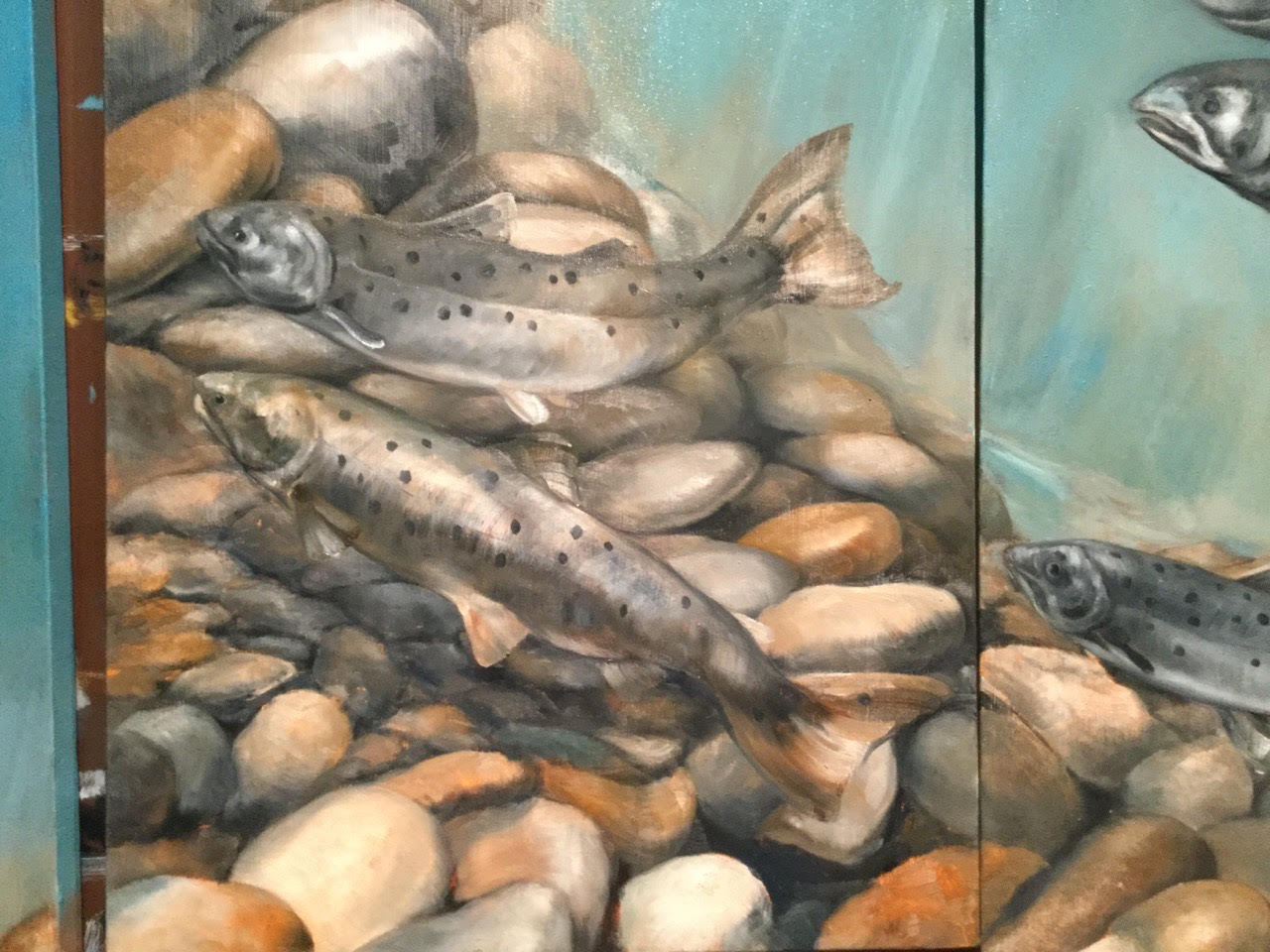 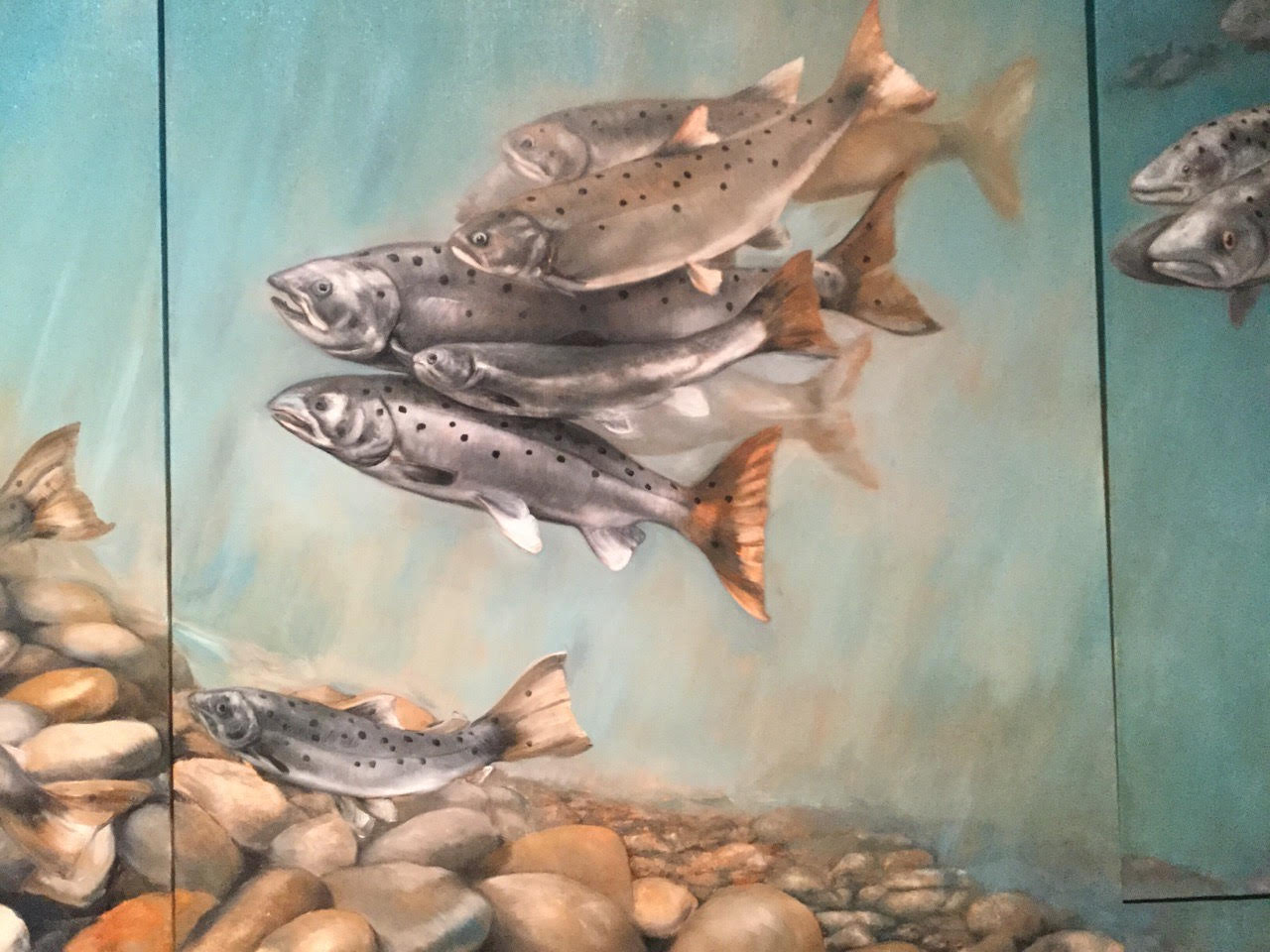 “For Ray’s Boathouse”
Oil on multiple panels
14’ x 14’
2014
“Idaho”
Oil/canvas
5’ x 8’
2014
This was commissioned for a big family restaurant that wanted a modern painting styled after an artist named Wayne Thiebaud.   The designers had to push their client a little but in the end they were very happy with the result.  Hopefully Mr. Thiebaud is not rolling in his grave. 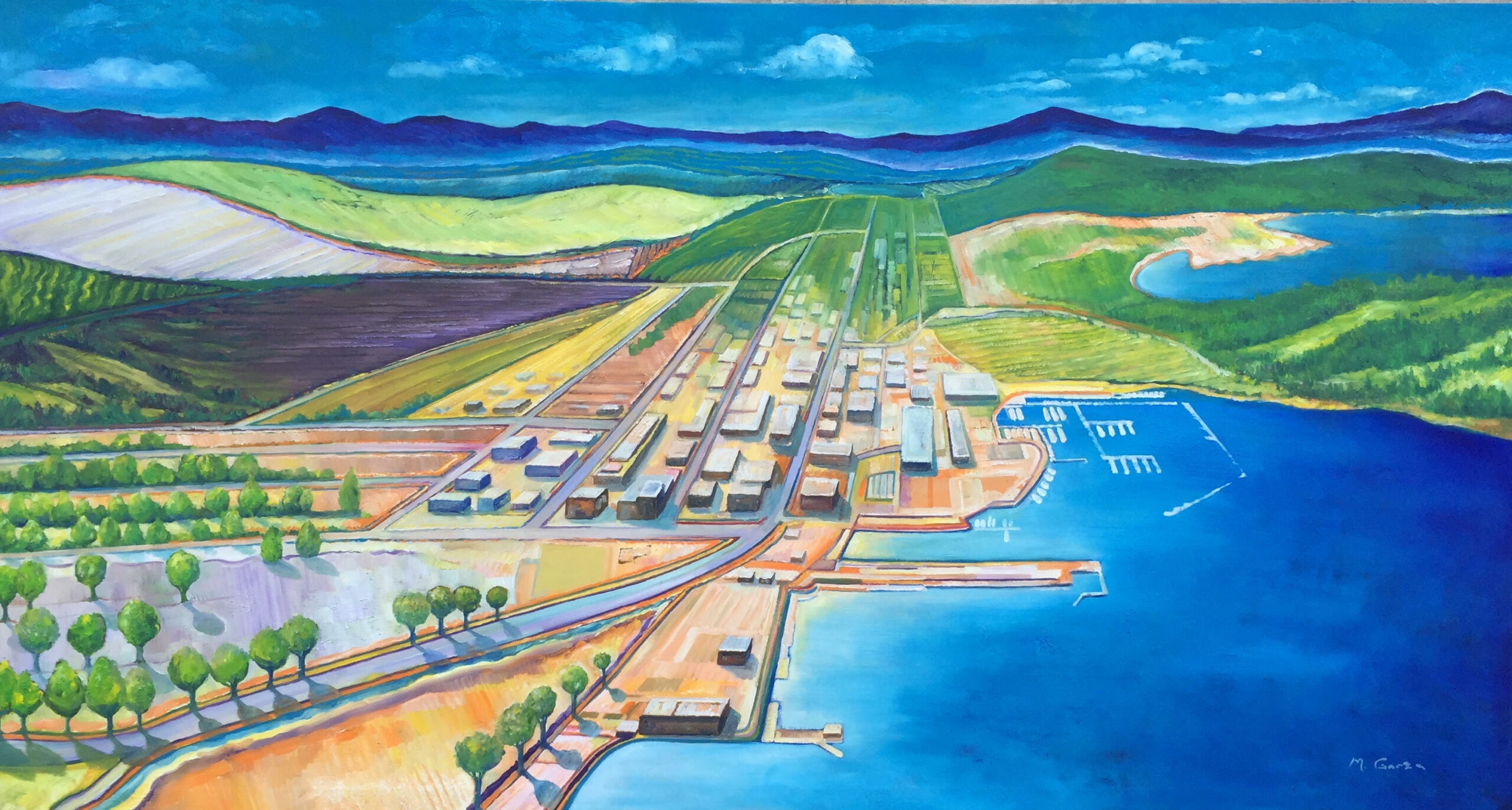 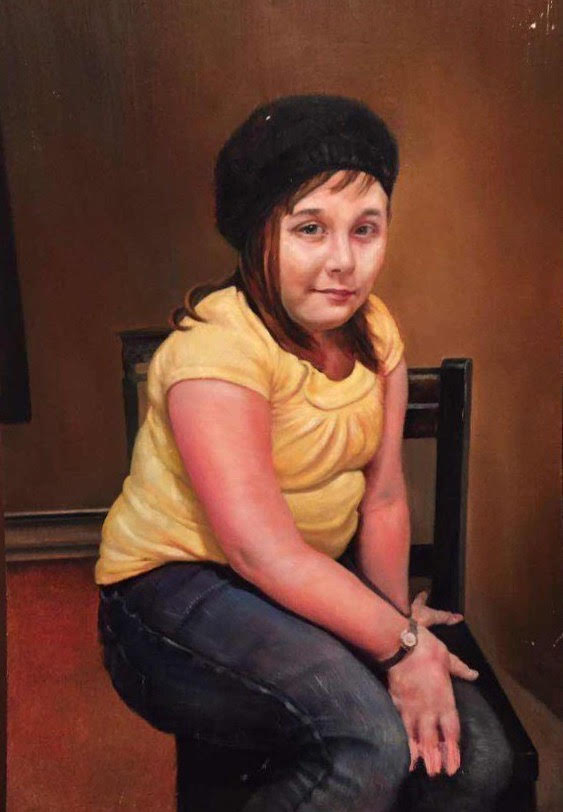 “Olivia”
Oil/panel
38” x 26”
2013
This is the kind of commission an artist like me dreams of.   The woman who commissioned it is a lover of my art.   She owns several pieces and all of them are top notch.  She asked me to paint a portrait of her daughter and gave me no limits or restrictions.   Olivia was a great model.  She let me take pictures of her and she came and sat patiently for me several times.  We actually struck up a nice little friendship.
I have always been inspired by the portraiture of one of France’s most beloved 19th century artists, Ingre.   His subjects appear so clear and present in his portraiture.   And yet they also seem relaxed and lush.   With most portraiture you usually see one or the other.  Thanks in no small part to Olivia’s patience and her mother’s trust in me, I was able to create this little gem for them.
“For Bryan”
Oil/canvas
6’ x 8’
2012
Bryan is a good friend who has commissioned several paintings from me. He is unsure of his tastes and equally unsure if he sees the difference between art and decoration or even the need for such distinctions.  In some ways I agree with him.  This distinction is arguably unnecessary.
In any case, Bryan was very particular about how this and a second piece would be constructed and look.  He was not as controlling as some clients but much more than one would think necessary from a guy who knew and appreciated my art and work ethic.  I think these pieces may have meant more to him than he was admitting to himself…thus placing them clearly in the “art” department rather than in the “decorative” department.
It was a joy to come up with is way of constructing a painting, to go on hikes near his beach home to collect the items and to paint them.  I often wondered why I haven’t done more works like this.  Maybe I will some day.
The combination of realistic items placed on display with the landscape functioning almost like pedestals for these precious icon like objects while melting into an abstraction further highlighting the realism of the featured objects works.   And was very satisfying all around. 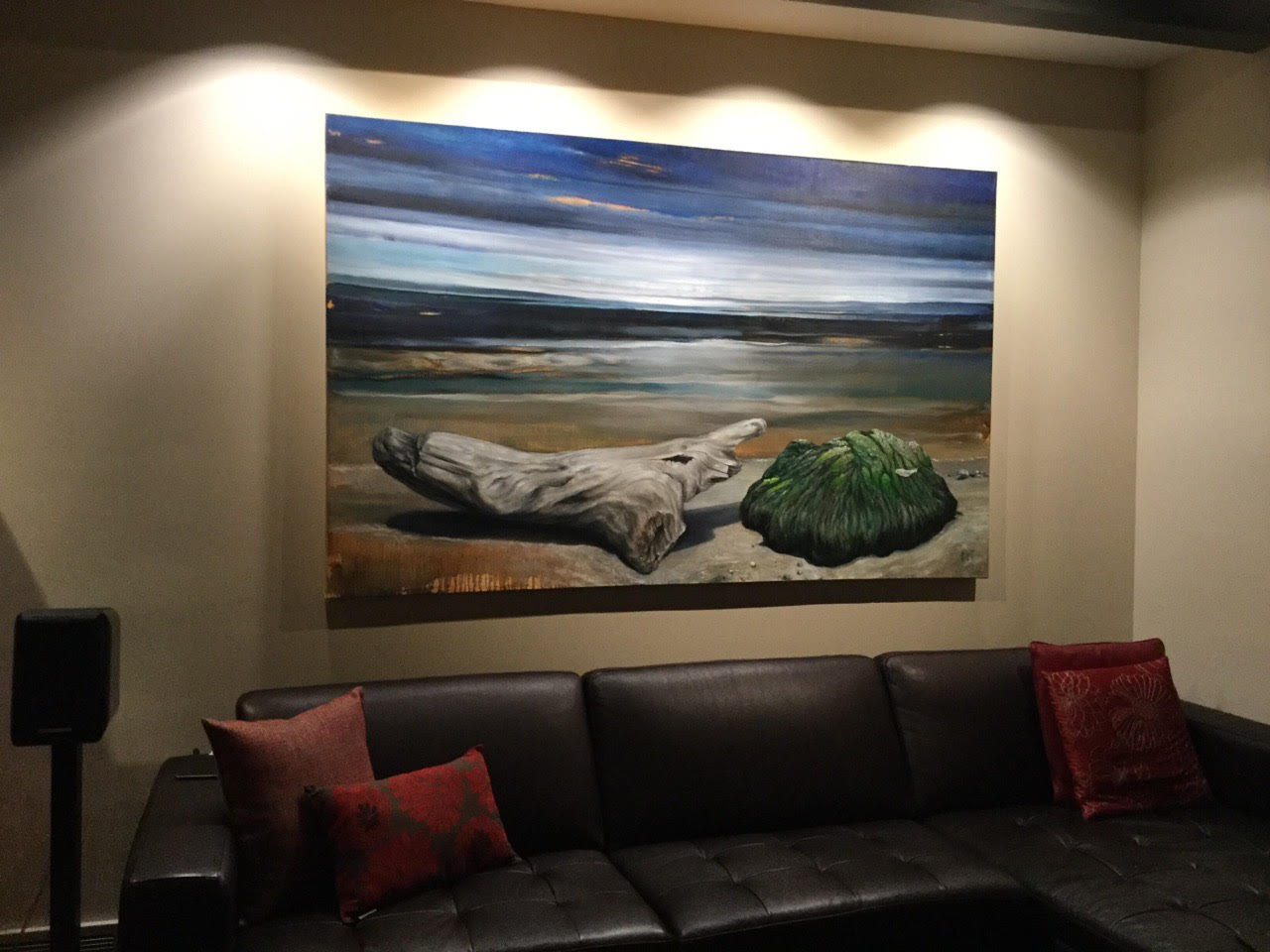 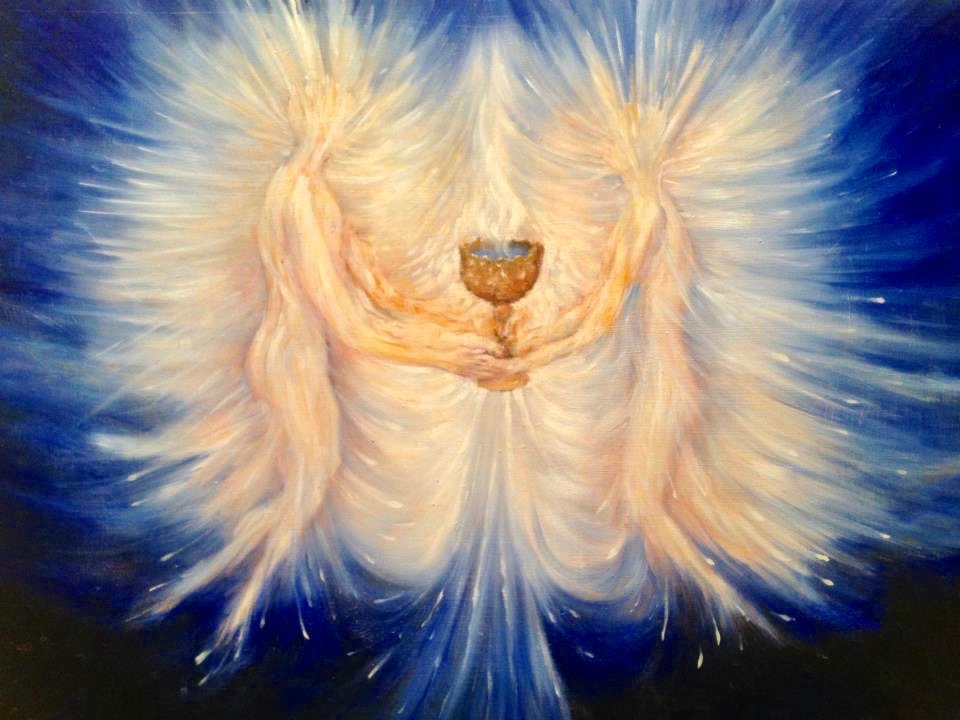 This is arguably one of the most challenging commissioned works I have ever done.  It was commissioned by the man in the painting for his wife who was terminally ill with kidney failure.  The painting took months to create and all the while everyone was holding their breath for his wife to pass.
But that was only the beginning of the challenges.   They both wanted her to be seen from behind as a fairy….with wings.   Not costume wings….real wings.   And they wanted her to appear as she did when they first met many years prior and before she was diagnosed with kidney problems.  She looked quite aged at the time of the painting and was barely able to walk more than a few steps much less pose even for photographs.  Modeling from life was simply out of the question.
They also wanted him physically wrapped around her somehow, to convey his support and subservience to her Prior to her illness they did BDSM role play with her as the “top.”   They also wanted to appear heavily tattooed although neither of them had any tattoos.
He was particularly adamant that the tattoo on his leg.  It had to be a very certain thing.   So, I decided to design the tattoo on paper until he approved it.   Then I rolled the paper into a tube about the same diameter as his leg and used that as my model.   He was also willing and able to model from life for me.   And as a result, he arrived on the painting early and looking exactly as himself….almost disturbingly so.  She was a real challenge both on and off the canvas.   Getting herto look youthful and like her and seen from behind yet showing her face without too much weird twisting etc….wow.
Then came the additions.   He wanted to surprise her by having me paint their bulldog into the piece even though that was not part of the deal. Yes….ok…fortunately the dog was a patient model.  I painted him from life quite quickly……but after she saw it…and loved it she wondered if I could paint him sitting on her favorite purple velvet chair.   Yes.  Ok.    Then….could we please include a favorite doll and could there be smoke and incense and maybe an actual miniature fairy.    I finally said no to the kitchen sink and army of toy soldiers.
In the end they were happy.   Very happy.    But then something strange and miraculous happened.   A kidney donor appeared at the last minute.  She had a successful transplant and a renewed life ahead of her.   But…wait for it….yep…they got divorced shortly thereafter and she wondered if I could paint him, the best part of the painting in my opinion, out of the piece.    Ummm…..no.
What I will do, if I can find her, is do a new painting for her in trade for this one.  This piece is a monument to perseverance for me.  I would love to own it myself. 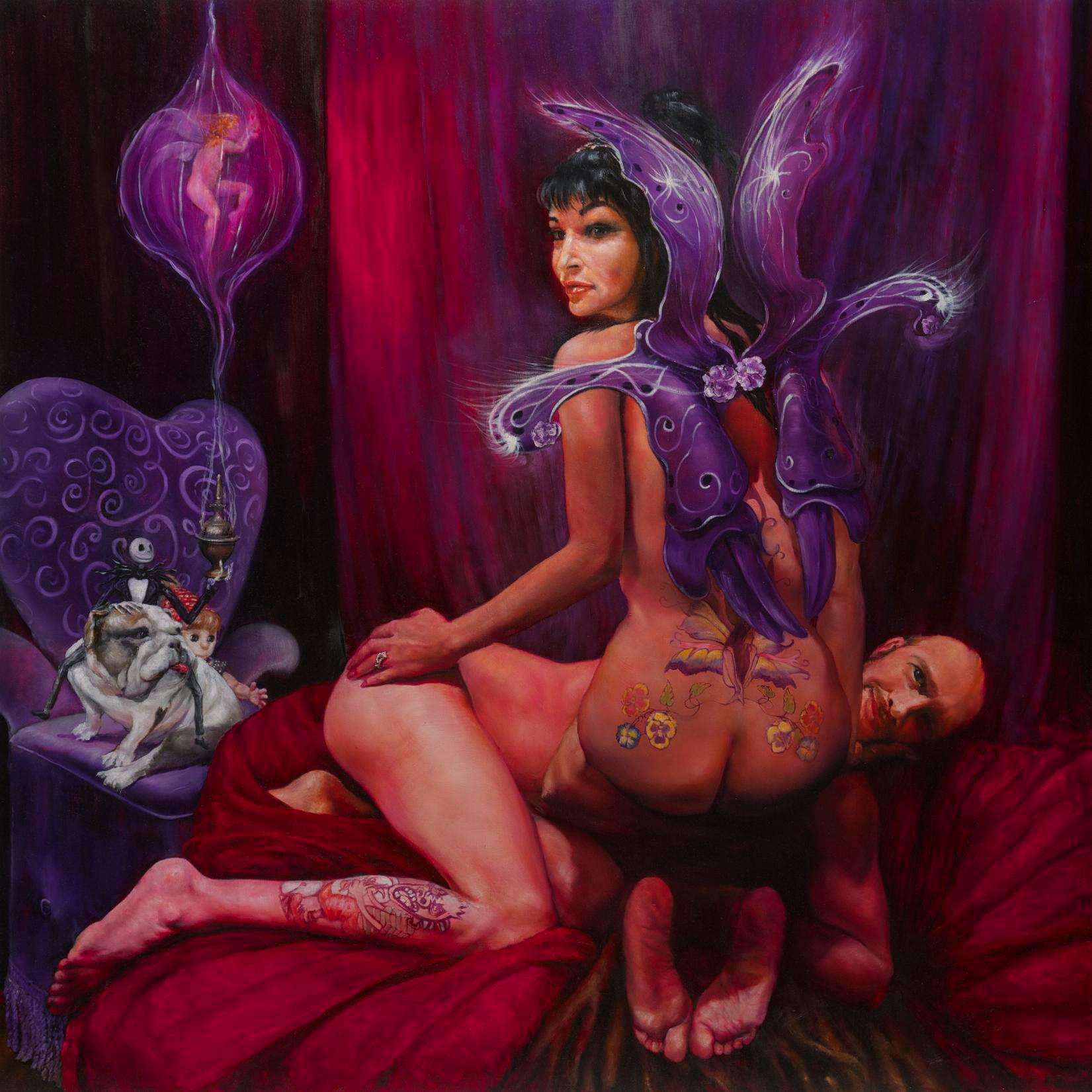 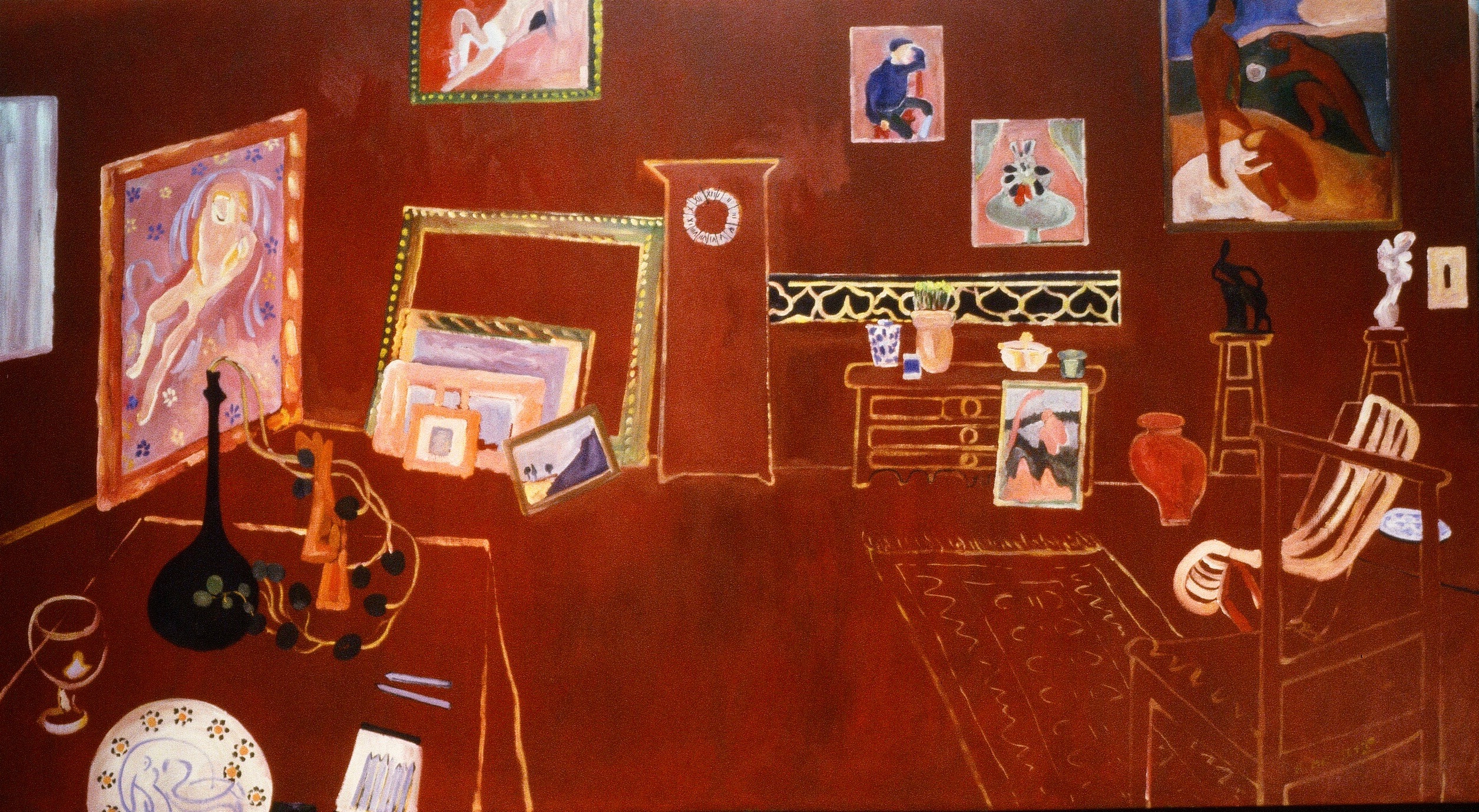 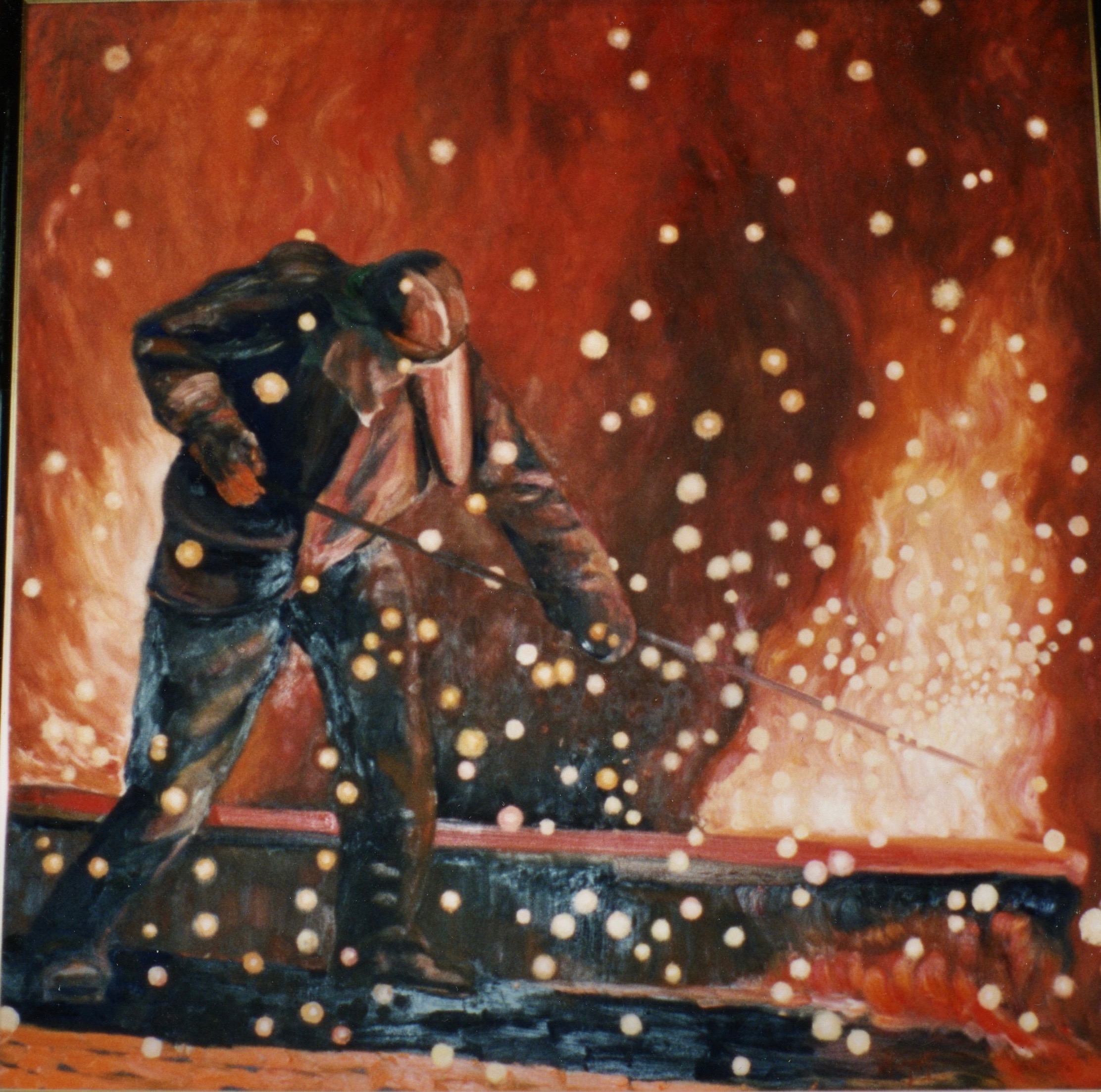 I don’t usually include commissioned work in this online portfolio.  However, this piece is very close to what I would have created without any constraints of the commission.  In fact, I would be hard pressed to say what is causing me to qualify that statement with “very close.”   I think it is that I always paint pictures of people I know or that I choose for a particular project.   These people came to me and asked me if they could pay me to paint their picture.

Perhaps by the time you are reading this I will have created a section in this archive of commissioned works.   But at the time of this writing it has not yet been created.  I include here because it was part of how and why my work shifted to more realistic portrayals and less singularly about the figures sculptural presence.   In fact I would go further and say it was increasingly about these particular individuals than about their sculptural presence.   This is a likeness of two particular people.  And not so incidentally, the 2 people who were paying me to do the work. 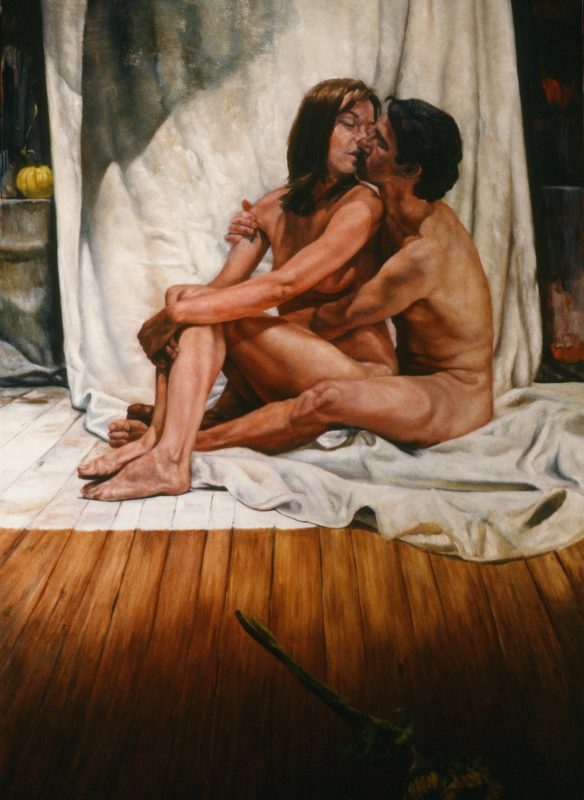 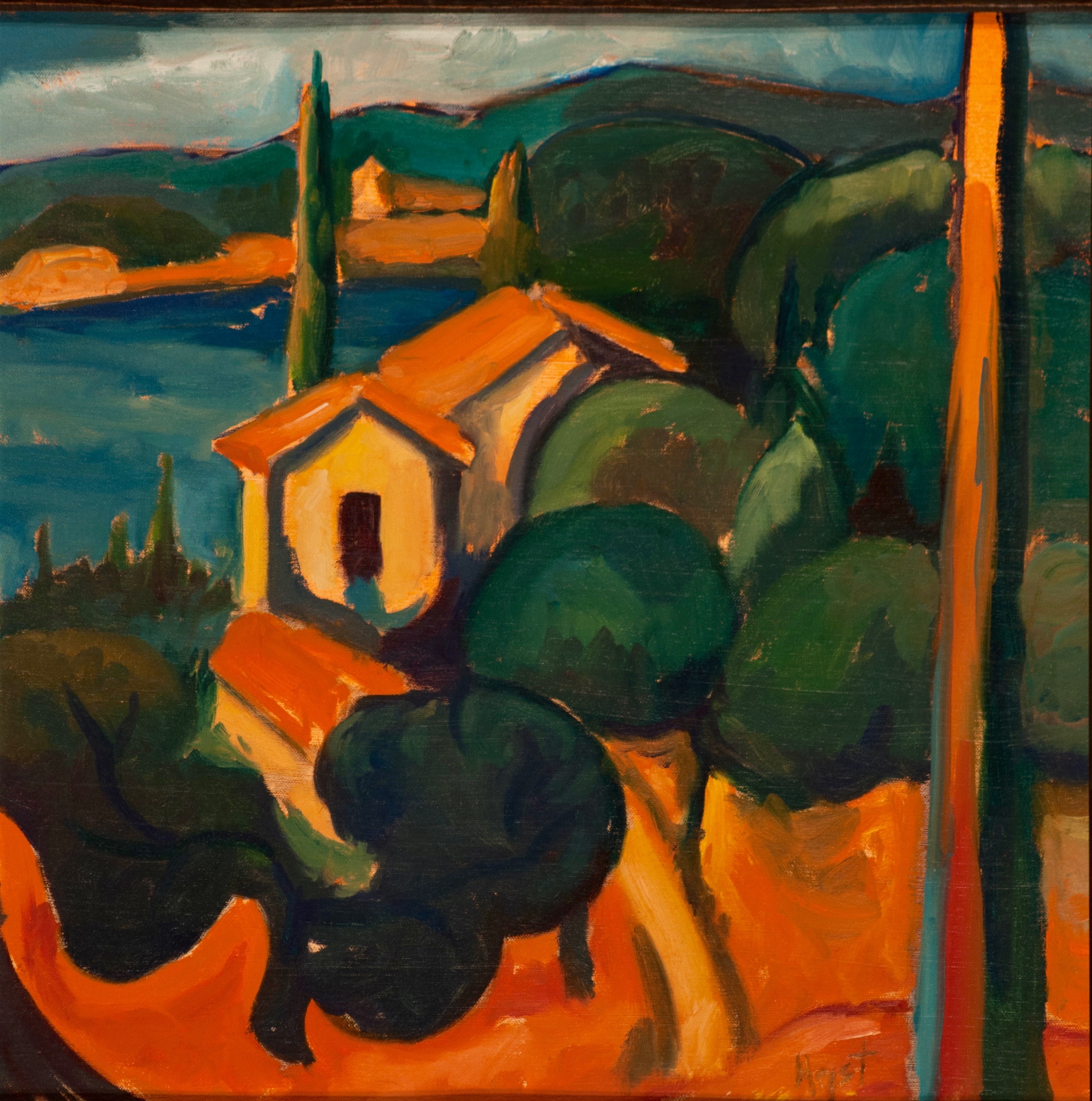 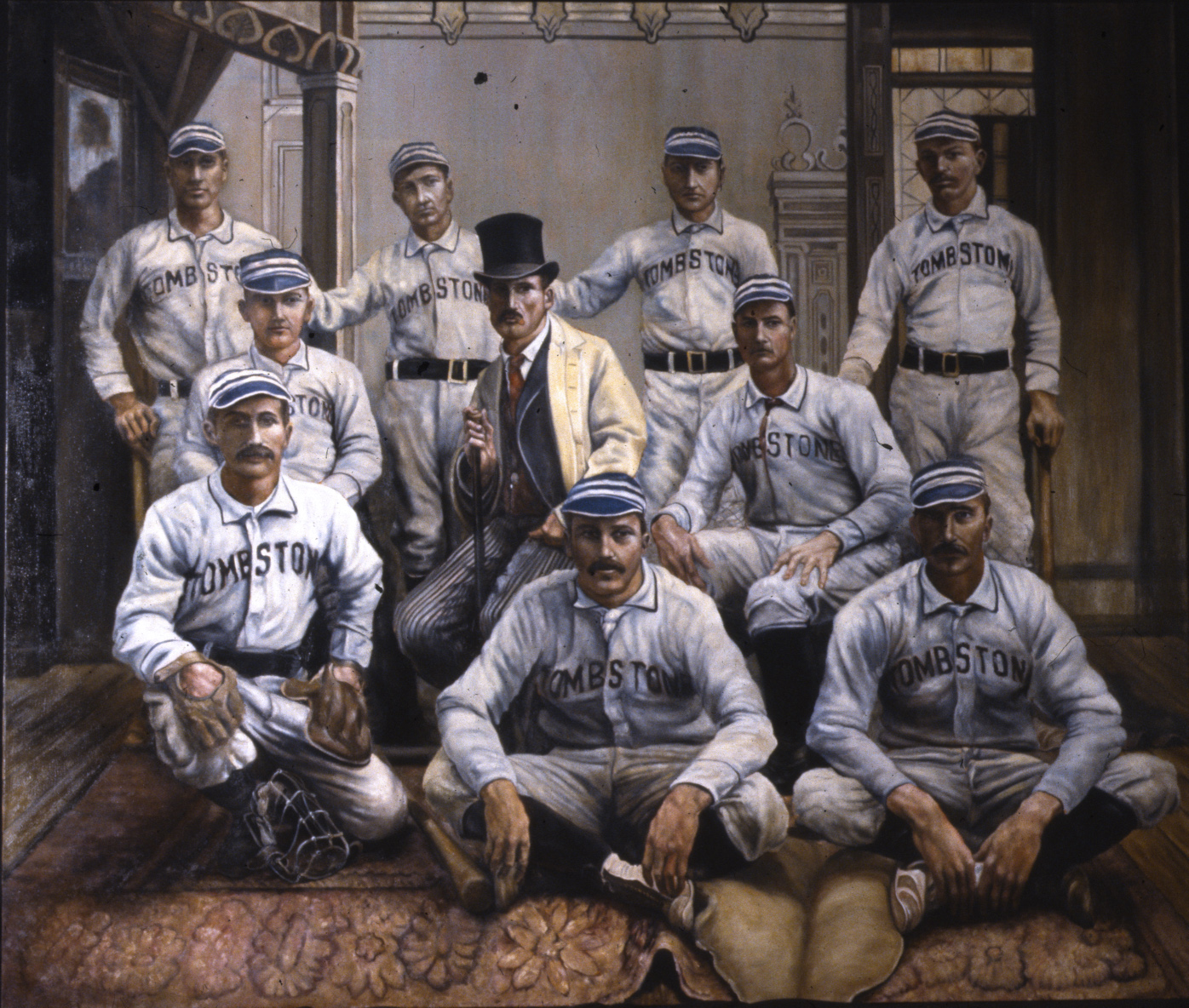 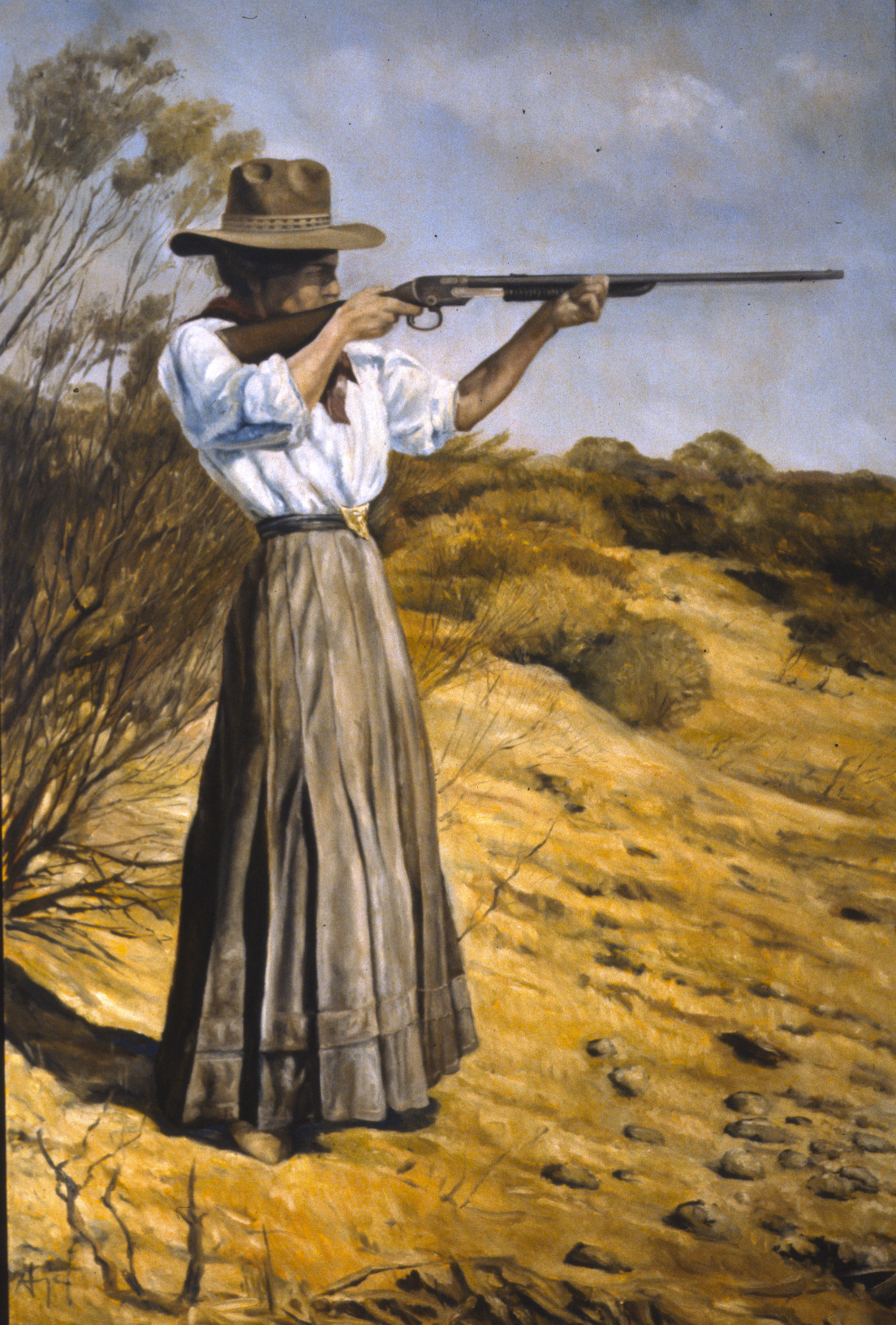 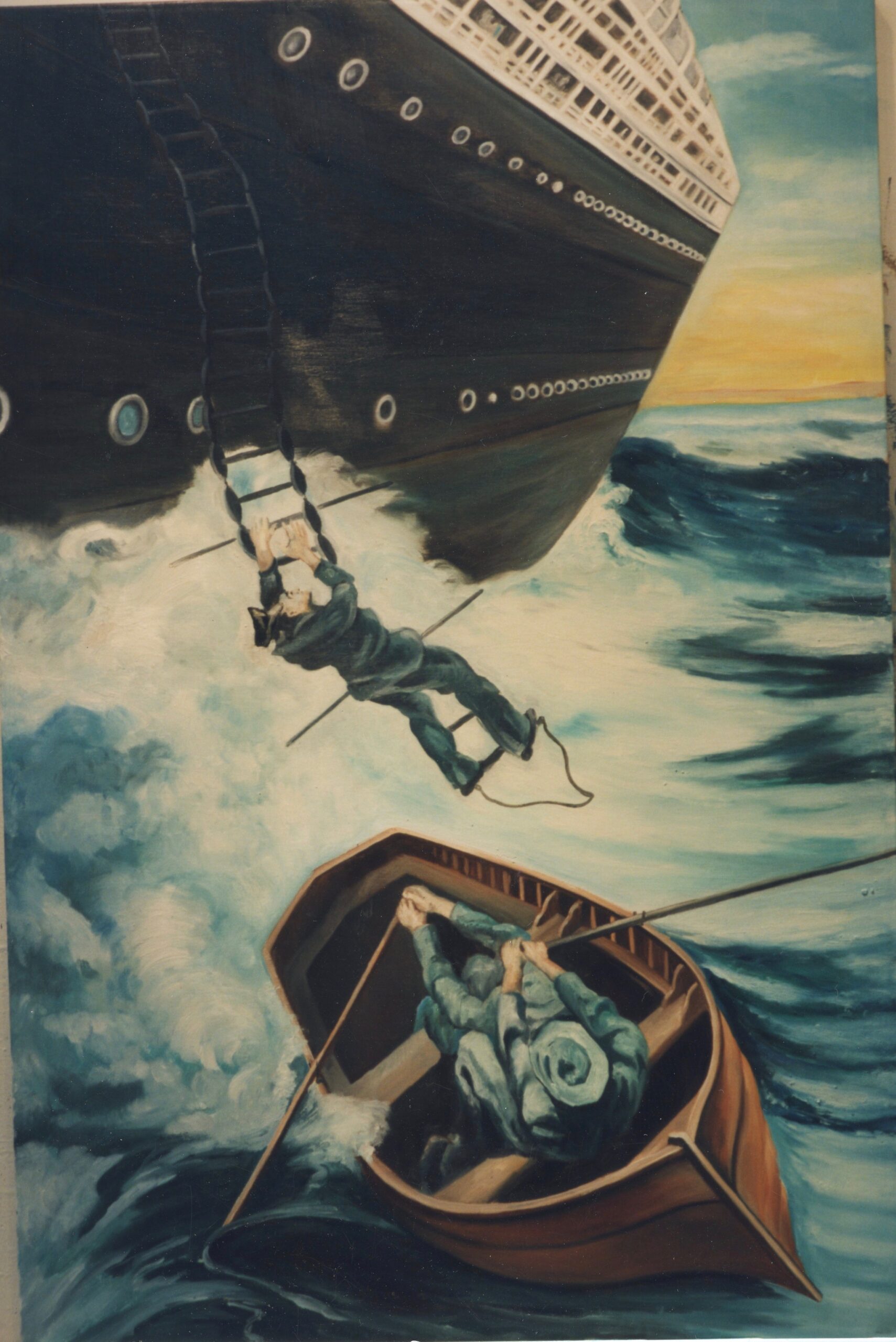 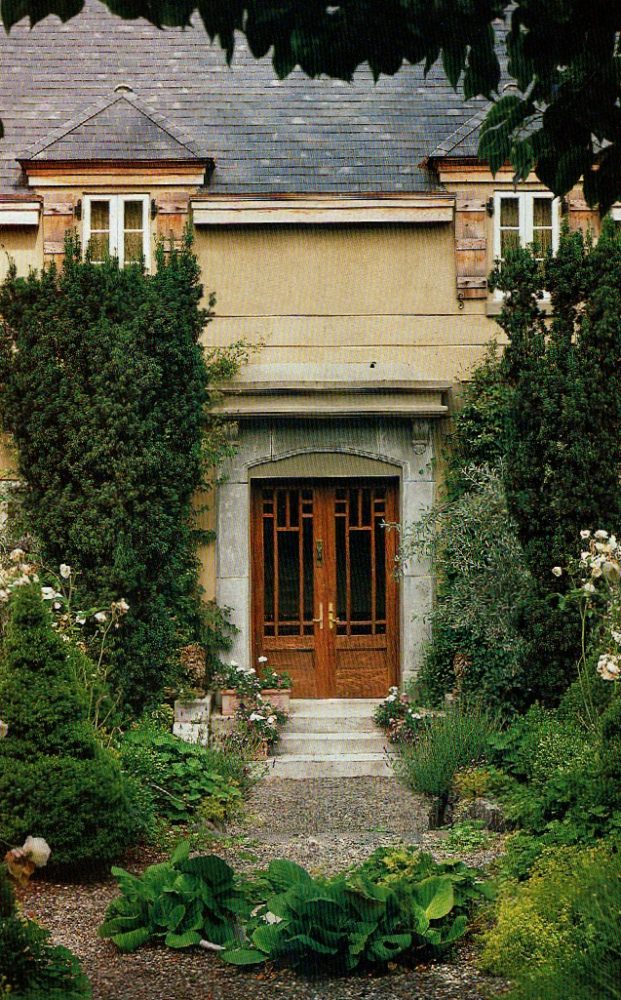 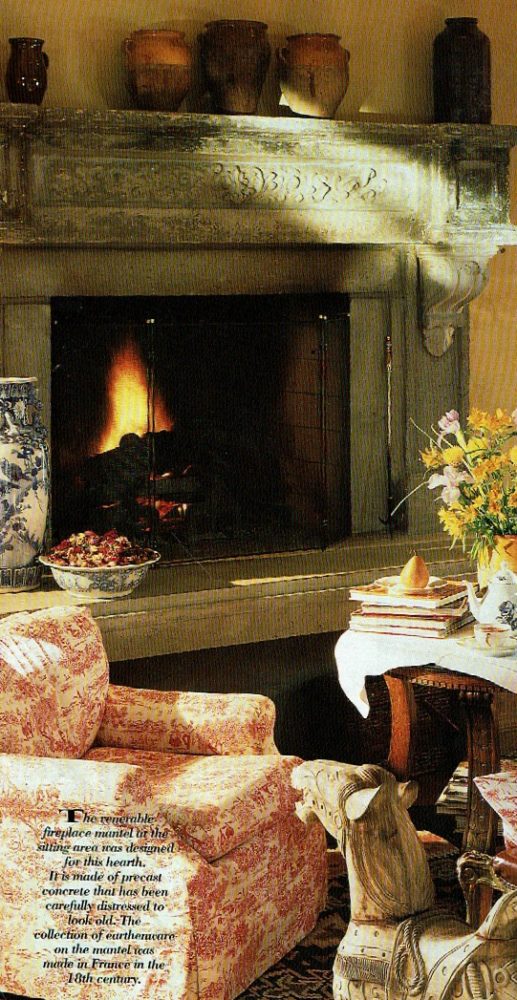 These are not really sculptures. I never thought of them as art. But I include them here because creating these was an important part of how I learned about concrete and mold making. It’s also how I fell in love with concrete as a material and began to dream about making art with it.

I was 31 or so when I made these. I was working in a shop owned by a nutty old Italian guy who had a flair for business and an even flair for being an Italian but had no artistic skill whatsoever. He did own a shop making concrete statuary and art. He hired me to make sculptural originals in clay. He then has his team of guys make molds and cast them by the hundreds.

Once in awhile someone would want a custom project. In this case I designed and built the fireplace surround and other features for this house. I even cast these pieces and was involved with the instal. I went on to do some of this work for my own clients but did not love it enough to create my own business doing just this work. Still, without these opportunities provided for me by Marco I would never have have learned so much about concrete.