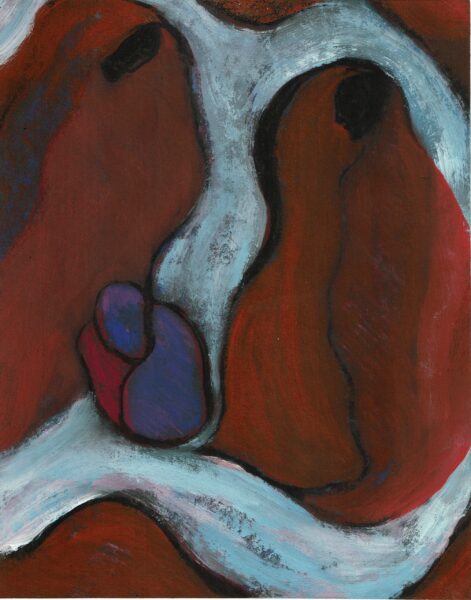 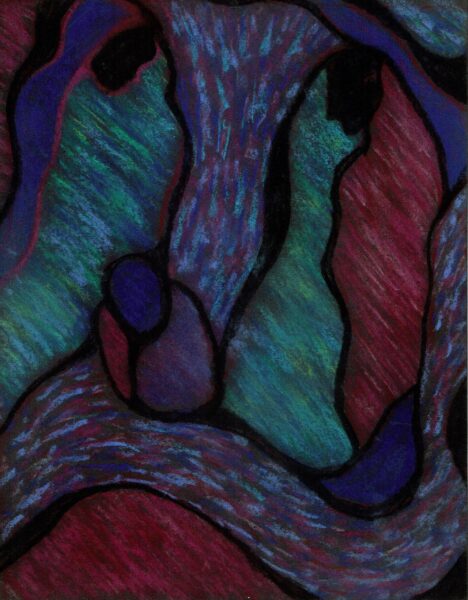 This way of composing a drawing was something I picked up from a group of painters in turn of the century France that called themselves the Nabi and their fore bearer, Paul Gaugin. Like my drawing here, these artists wanted to use the colorful approach of the impressionist painters but for more symbolic expressions.

I have included these pieces in the drawing section of this site because they are done with pastels. It’s a somewhat arbitrary distinction. What makes a drawing a drawing and not a painting. It doesn’t really matter of course. But one has to break things up a bit in order to retrieve it more quickly but also to deepen its understanding of how it fits as a single work into a group of larger works and their unfolding. It also could possibly yield some understanding of how it was made.

One way to classify a drawing as a drawing as opposed to a painting is that it is done with something held in the hand that rubs off onto the paper. It is not a brush or other tool that ha to be dipped into something and then applied to the paper. The implication is that this way of making a mark is more direct and by extension potentially more intimate and honest. In my experience that is often the case.

1983 was my last year at Penn State. By this time I had made the transition from architectural engineering to artist and barely managed to find the justification to stay in school and graduate. One of my key friends at that time was a young man my age named Zoltan. He had a lover who did not go to Penn State and who I only met once. I sketched a realistic drawing of her while they visited my studio one night. I felt sorry for her because I knew Zoltan loved her but that he had considerably outgrown her. And he was already involved with other women, women who represented and embodied the self he was becoming during his years as an undergraduate student at a university while his girlfriend continued working as waitress at a small diner in the small town where they grew up in rural Pennsylvania. I remember squirming in my seat that evening as I drew this sweet young woman, so obviously in love with my friend and so equally unprepared for the train wreck that was approaching.

I’m not sure why but later I decided to paint the black expressive marks over the drawing effectively boxing her in and accentuating her cuteness, the very quality that both drew Zoltan to her but ultimately drove him away as well. At the time I remember thinking about those marks as being more about my desire to include the emotional intensity of the abstract expressionist painters I admired with the psychological nuance made possible by the realistic expression of a human face as well as its volumetric presence. The result, however, is a compelling little miniature that still grabs and holds my attention 40 years later. 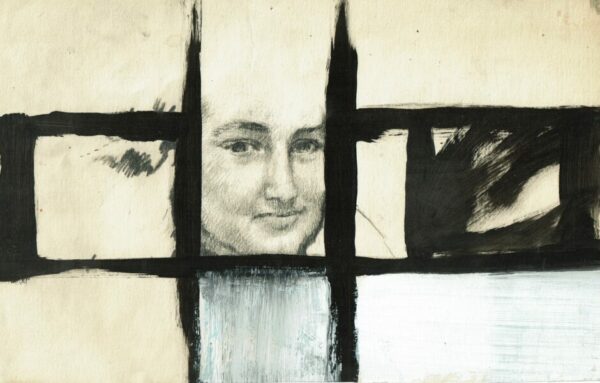 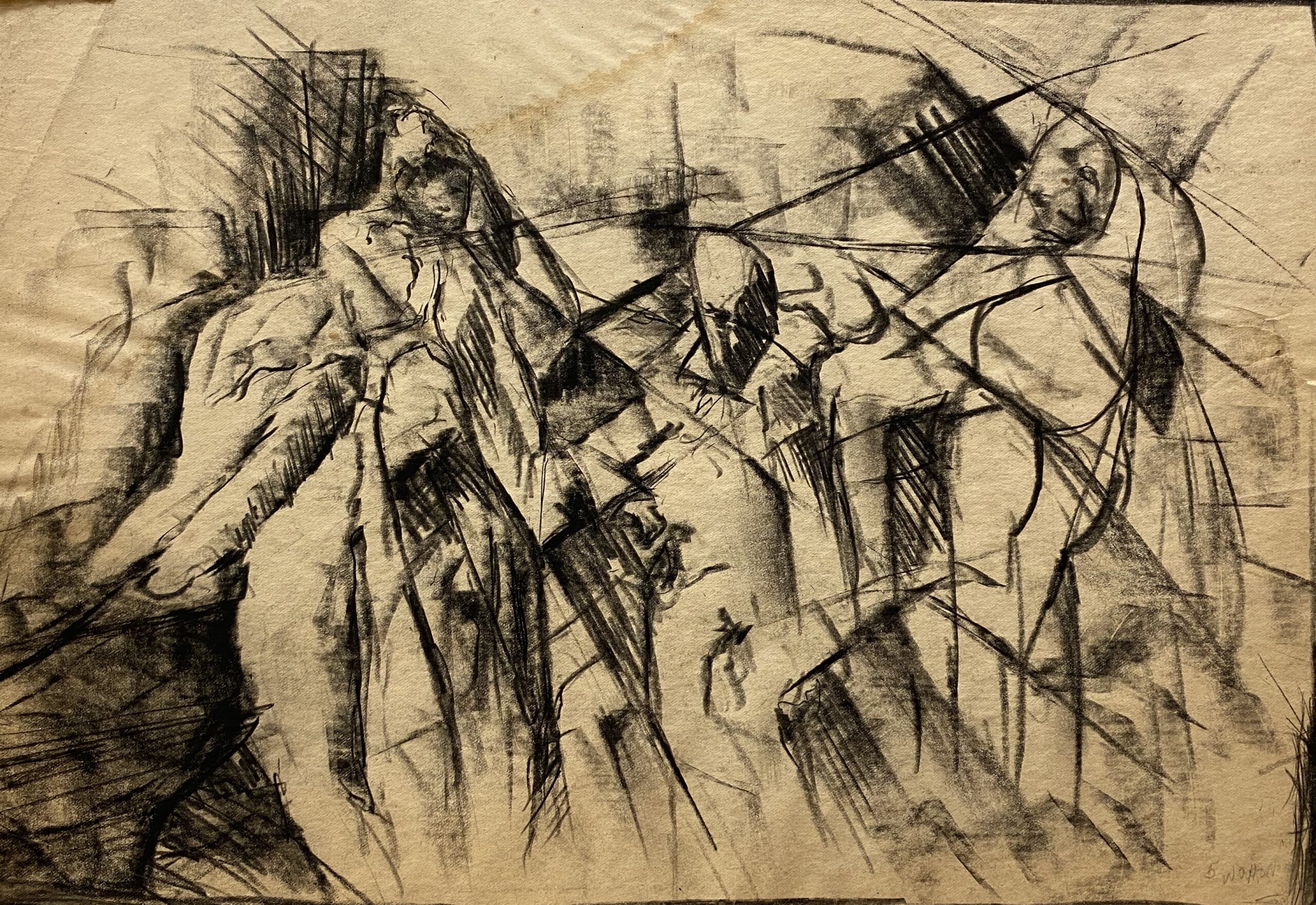 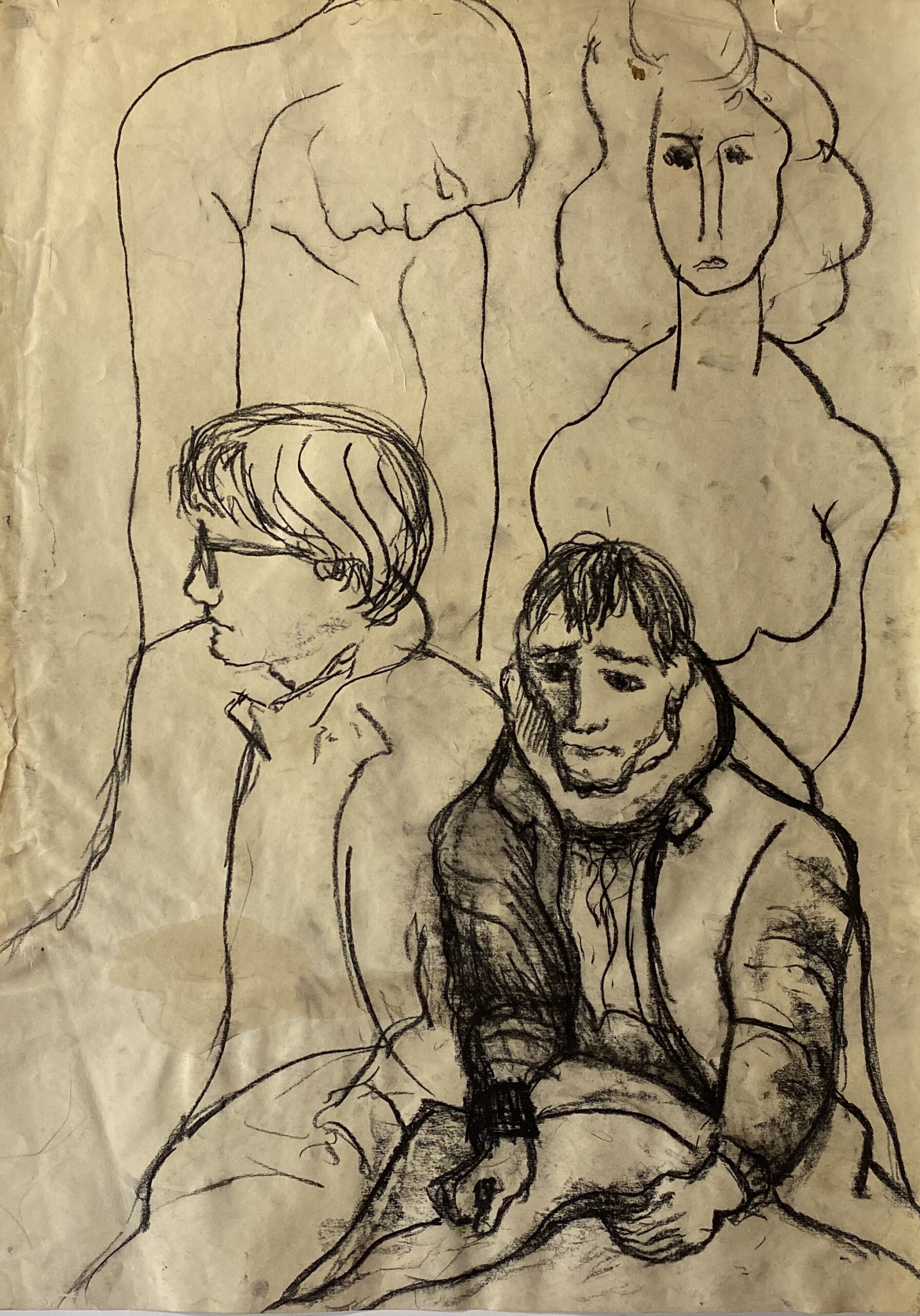 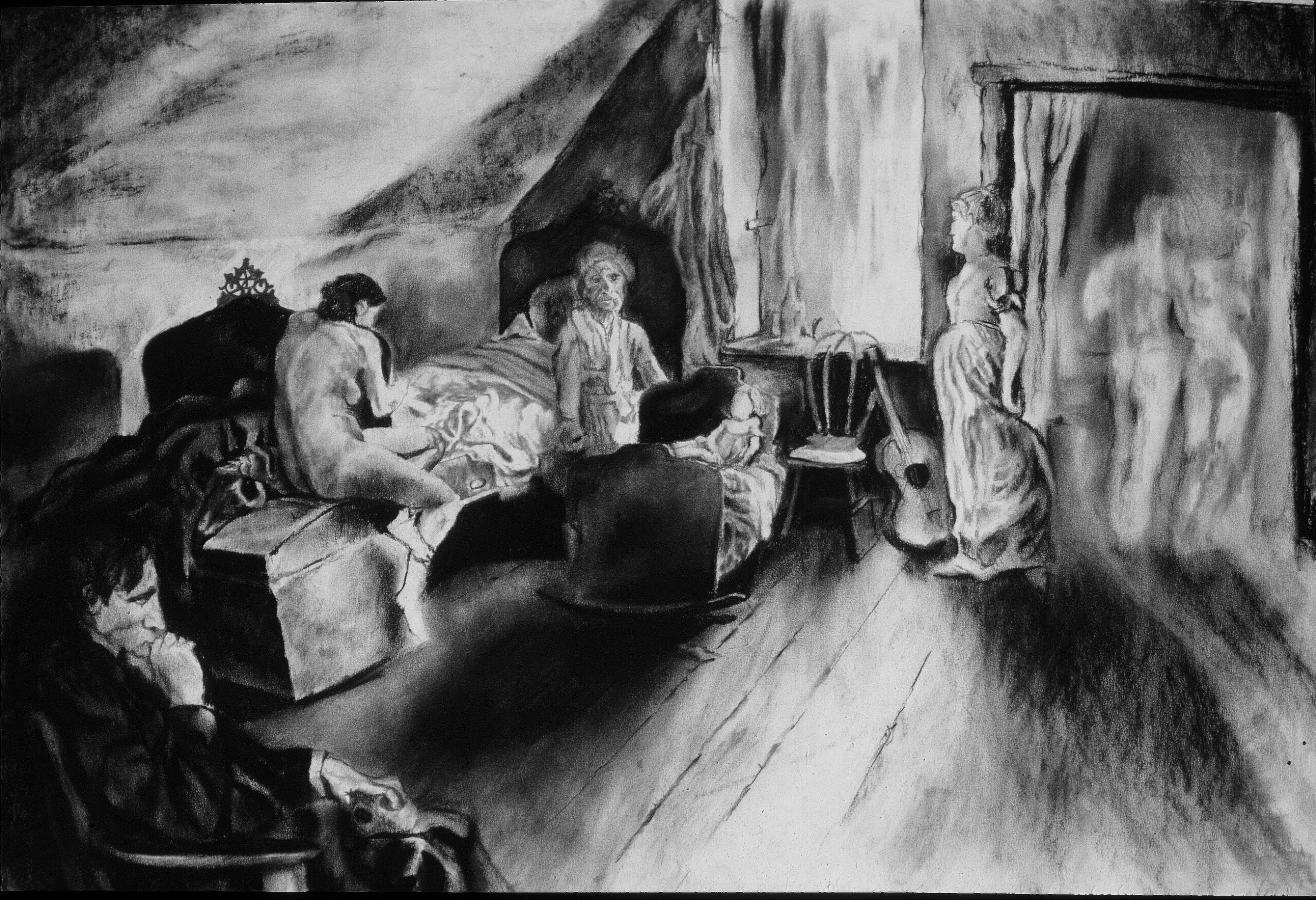 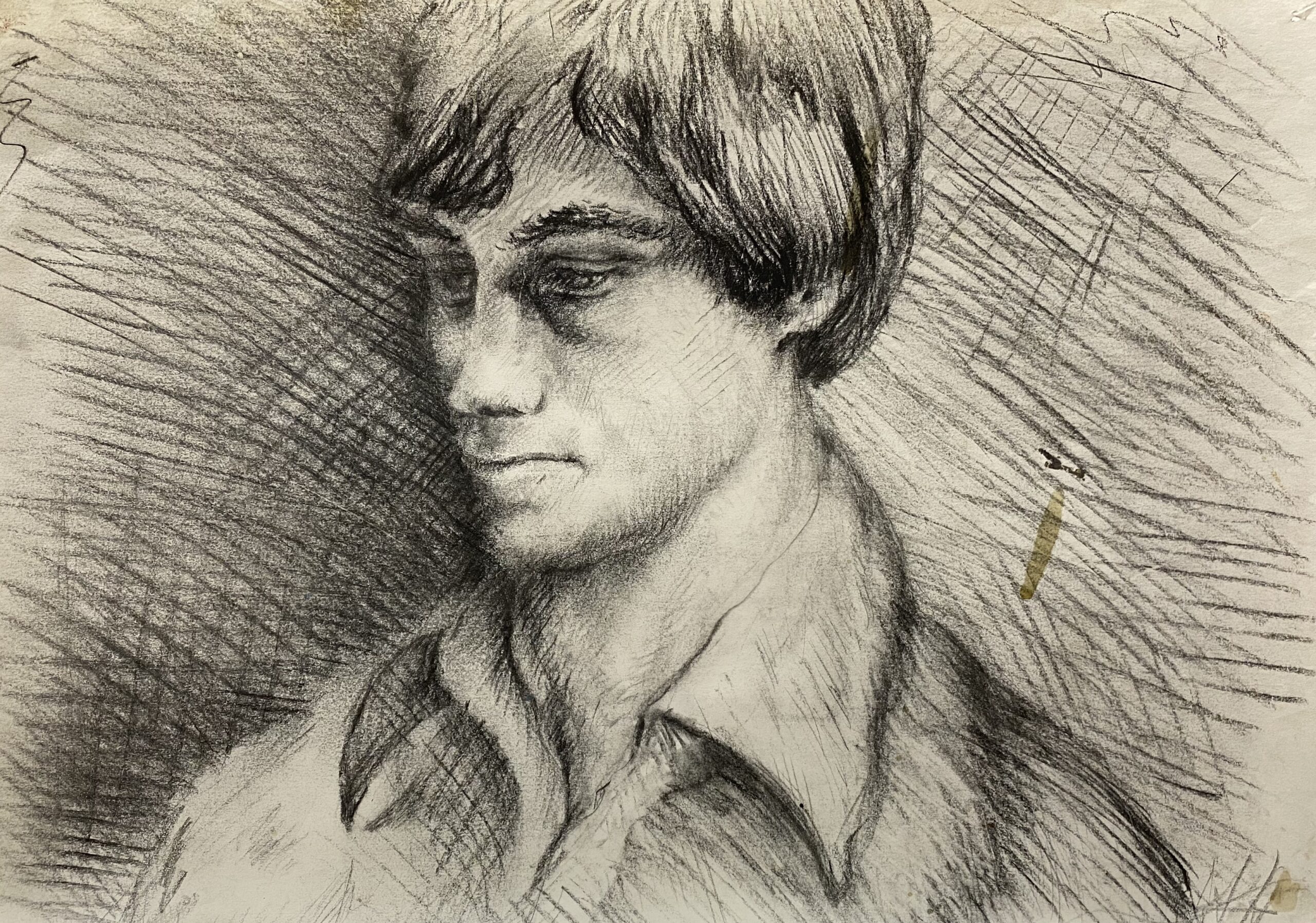 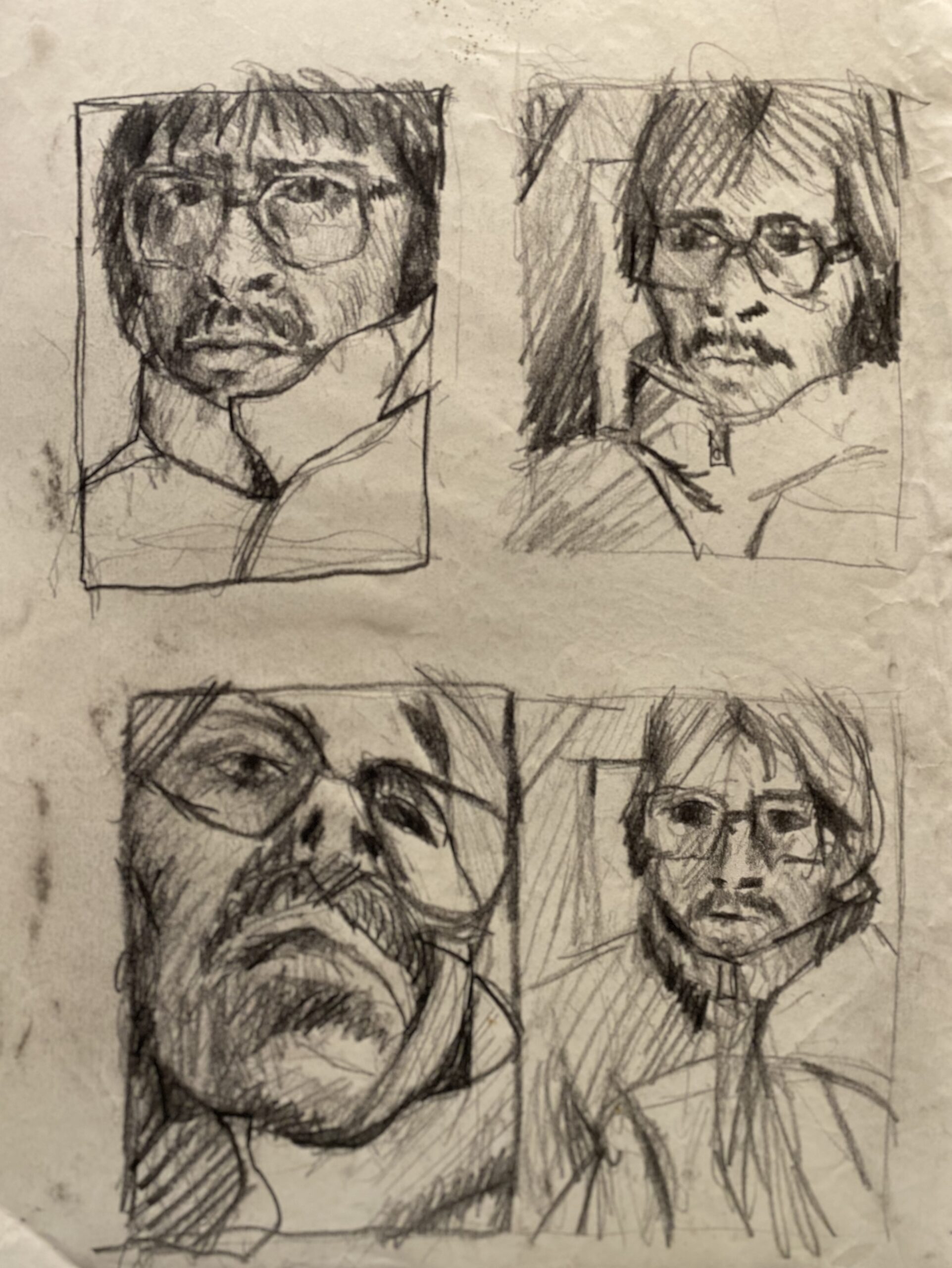 These 3 drawings of Dr. Woodal do capture some of the power of her presence and my admiration of her. She was a force. She was 6’ tall in flat shoes and an even more towering intellect and booming voice to convey it. She suffered no fools and was as certain of her own genius as she was of the idea of genius itself. Naturally she was attracted to her brightest and most talented students and made no apologies for bringing us together. I did indeed meet some of Penn States brightest people through her.

When I met her she was completing her PhD dissertation wherein she asserted that Picasso’s seminal work, “Le Demoiselles D’Avignion” was based on the traditional theme of the Judgement of Paris portrayed by many artists from Ancient Greece on up to the 19th century. To this day I still view the painting that way even though subsequent scholarly work has revealed how much it was influenced by the myth of Achteon seeing the goddess of Diana at her toilette and then subsequently being consumed by his hounds.

In any case, I became fascinated with the idea of cubism and even explored its emotive possibilities, something that Picasso never did. Dr. Woodal and I had many spirited conversations about that very subject.
These 3 drawings were all done over the course of a few months and demonstrate how I was trying to absorb and execute in as many idioms as I could. 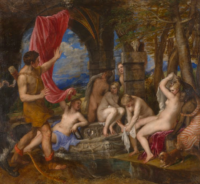 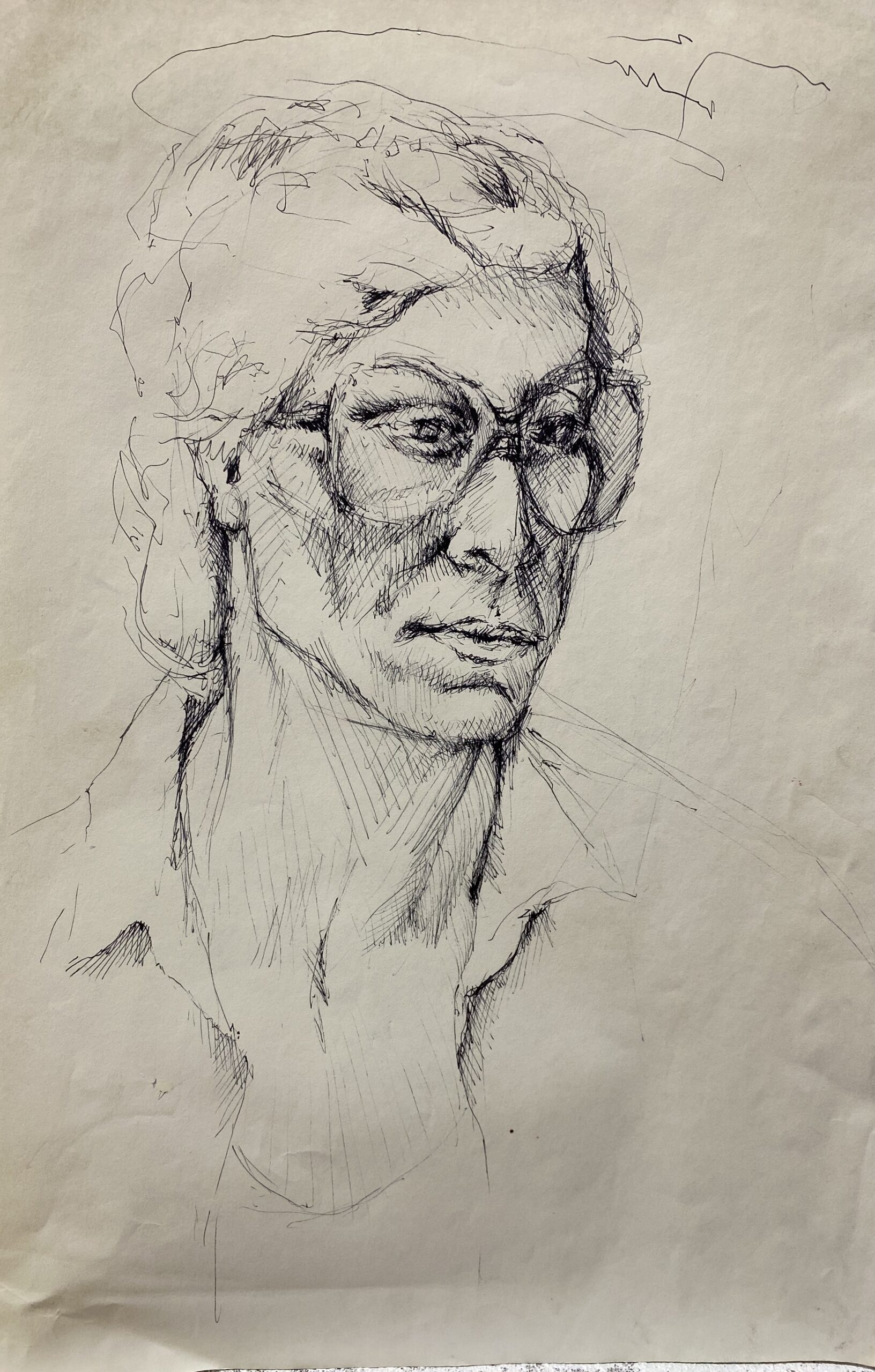 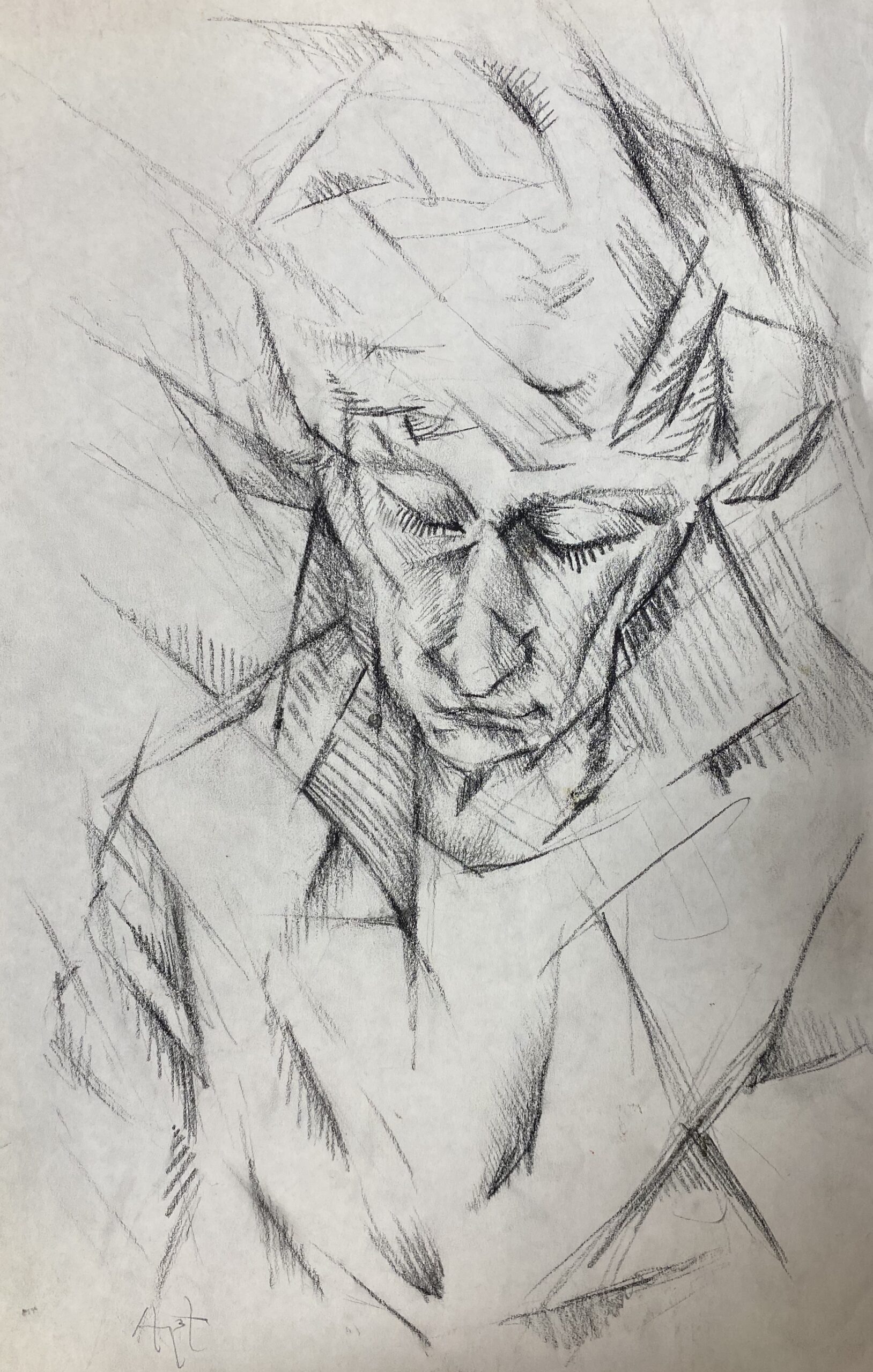 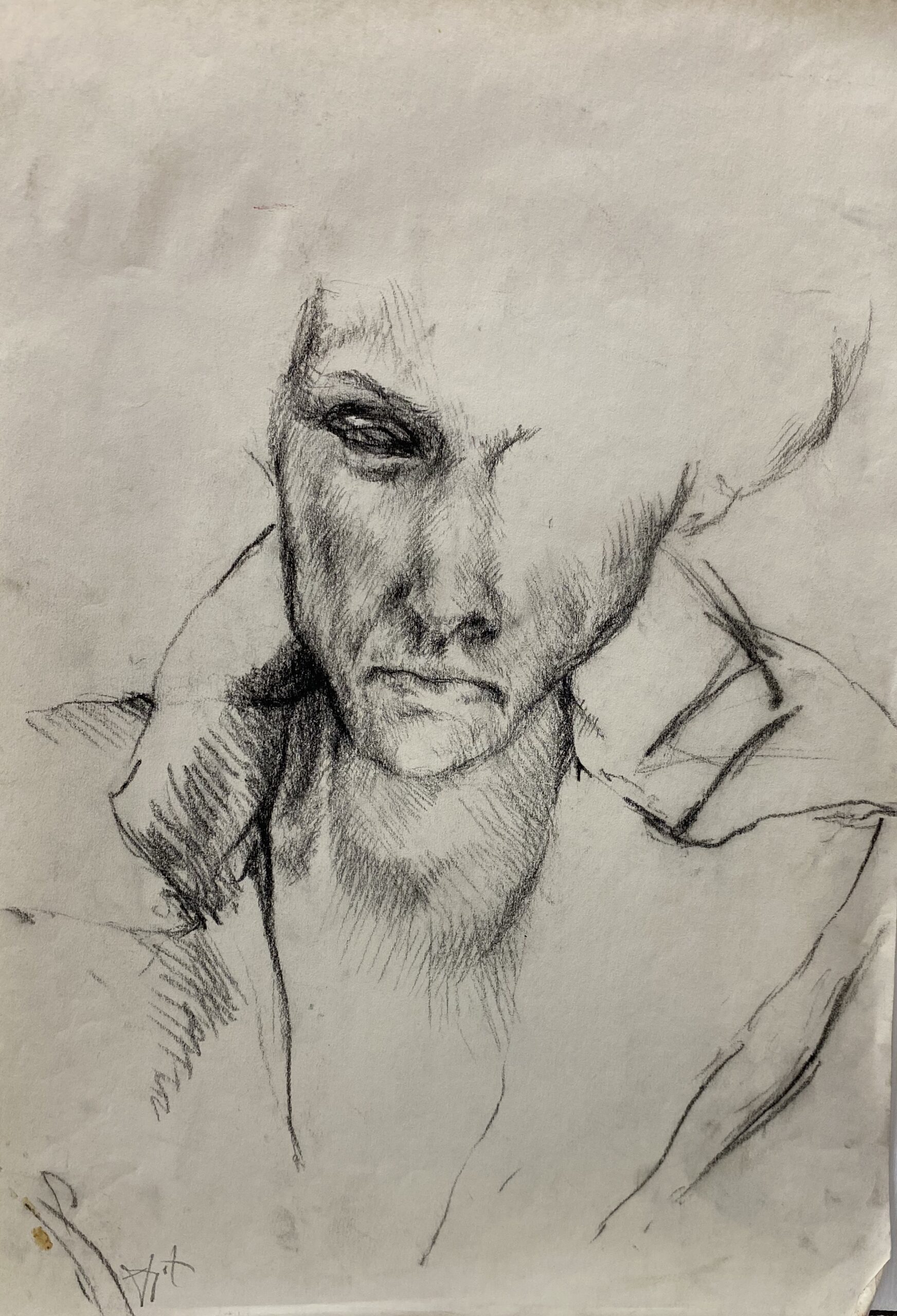