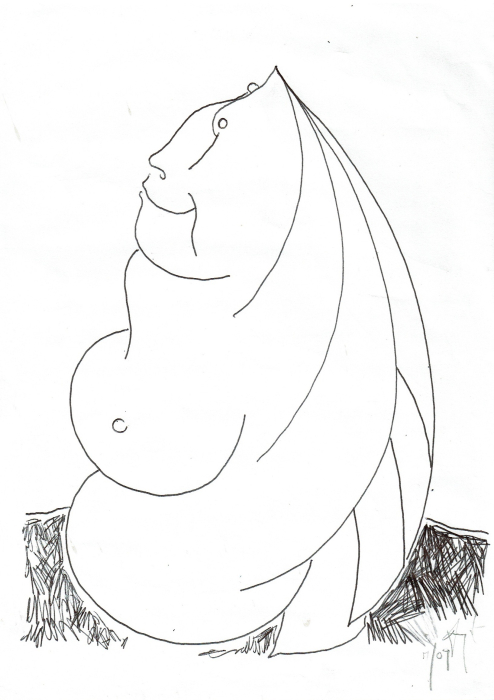 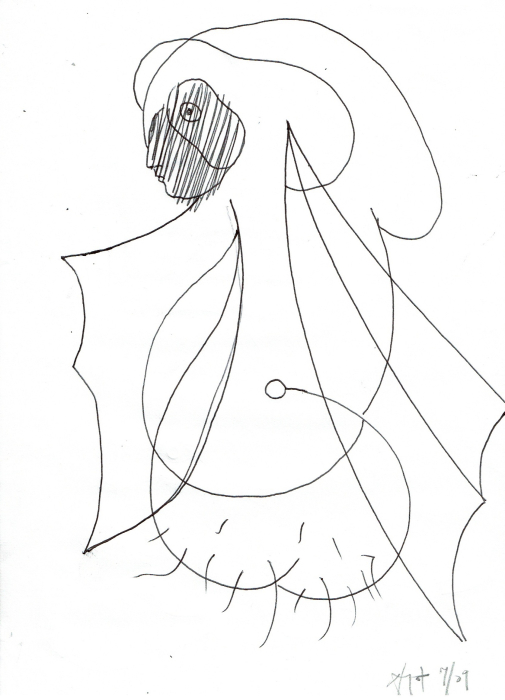 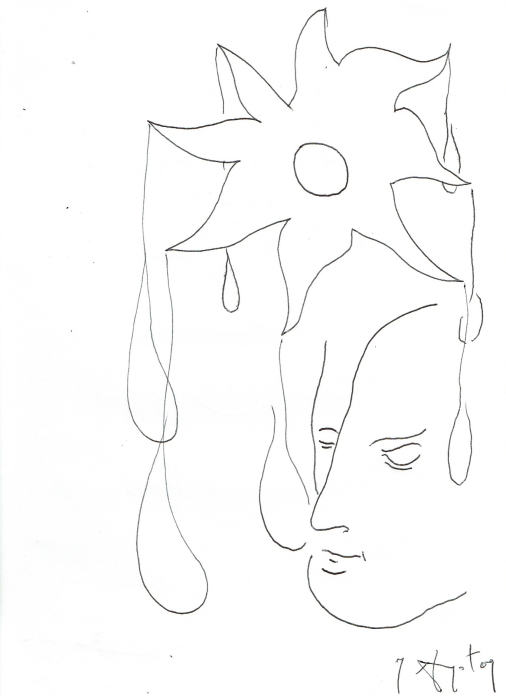 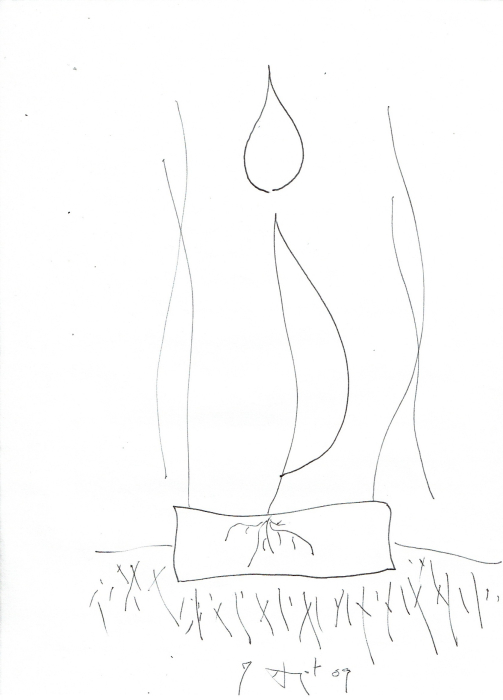 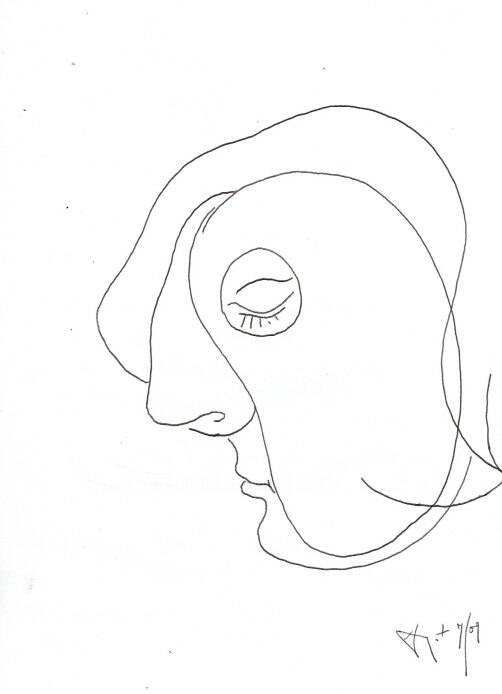 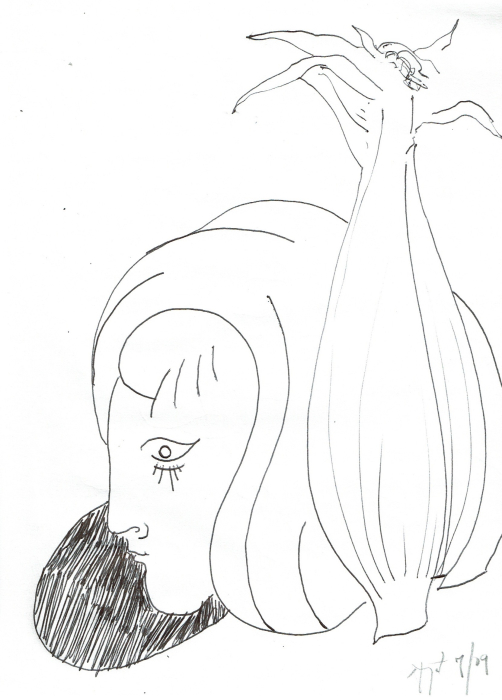 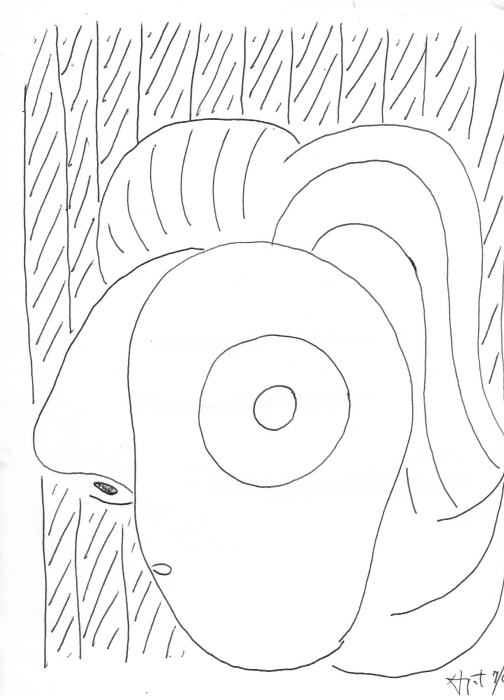 Strictly speaking this is not a surrealist drawing. However, for comparison’s sake, they are closer to that than most other identifiable styles of art. My friend Doug likes to refer to them as “mythic truth” drawings. I like that moniker even though it doesn’t roll off the tongue very easily.

I like it because they are truthful at the level of meaning but clearly they are not realistic or set within clear and consistent realistic constructs. They are more real… or more truthful than a set of facts in the same way that a good novel is often a deeper and more realistic than a “true story.” Moreover, they don’t avoid the recycling bin unless they have some level of compositional beauty or emotional forcefulness, hopefully both.

Here, like most of my work in this genre, there is some kind of story being told through a combination of the suggestion of a scene or place along with symbols that have their own suggested or obvious content. Then, the way in which these elements interact becomes a third vehicle for communicating meaning or emotional force.

Sometimes these drawings just strike a cord with people. Other times they provoke some thoughtfulness that might not otherwise happen. And some are just flops and end up in the burn pile or recycling bin. The one featured here is a quintessential example of this unnamed group of my work. I don’t know exactly what it means but that is what I like about it… the exact part. I could speculate but I would like to think that the openness of the piece is what makes it fun for other creative type people to enjoy as well. It’s an invitation and even a bit of a provocation to let one’s imagination wonder.

Is the heart shape a creature? Is it me? Am I on a journey? Is that a road to a mountain top or a cloud over my ambitions? Am I editing my own rays of sunlight? Is that my own shadow getting in the way or is it supporting me? And that eye? My inner vision? My outer vision? Is the center of the heart my other eye? You see where this is going. And all the while, it’s a good composition. It’s constructed well with some standard “good composition” bones but a few surprises in there too. Not bad.

What do you think? 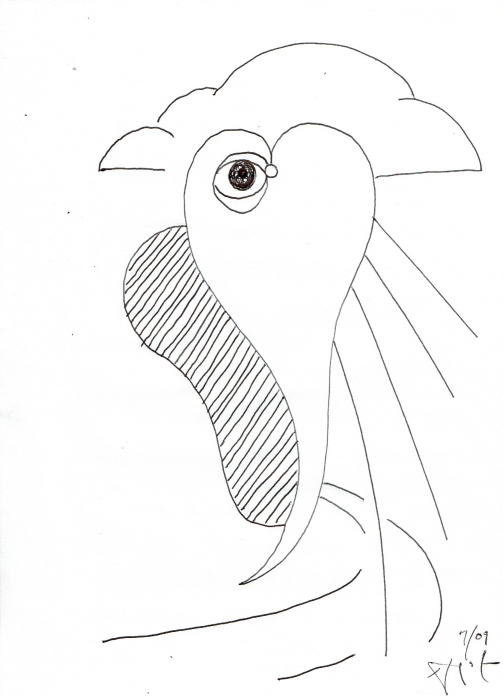 I did not produce as much art in 2009 as most years because I was very busy running my Bistro, theater, art gallery, little spa and raising my 2 kids. And I was attempting all of that while drowning in debt during the worst economic crisis in my lifetime to date.

Nevertheless, I had an ongoing working relationship with a fantastic woman named Sophie. She was the consummate artist’s model. She had a beautiful full sculptural figure. She was athletic and flexible. She understood what artists mean by “line.” And she took the time and trouble to learn what I was looking for in art. She even brought me ice cream!

For quite a few years we had a regular gig on Tuesday nights. During that time I did some striking work from her, directly from life, from photos and from drawings done from life. Unfortunately I sold some of those drawings. Perhaps one day I will be able to buy them back.

Sophie was also unattached to whether she was portrayed as the incredible beauty that she was or as any of the monstrous experiments of form to convey my own emotional or philosophical ideas. These latter categories were about me, or my art to a much greater degree than they were about Sophie. And her lack of ego attachment to any of that was an incredible gift to me. 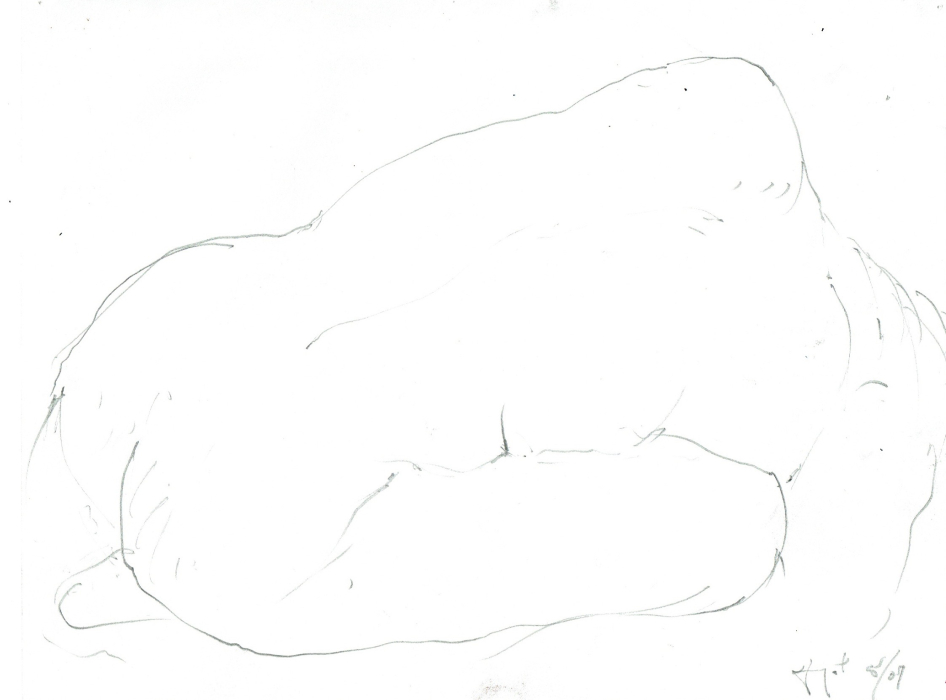 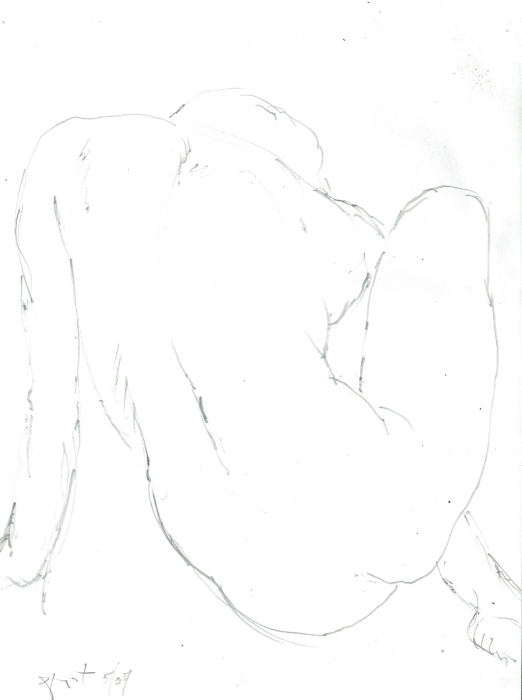 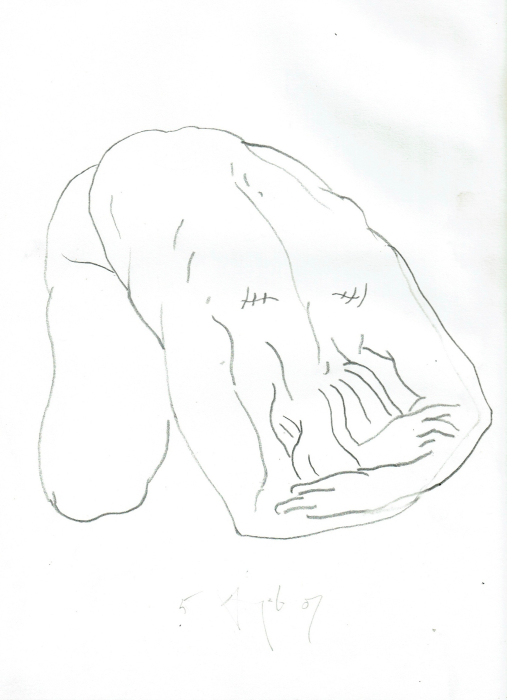 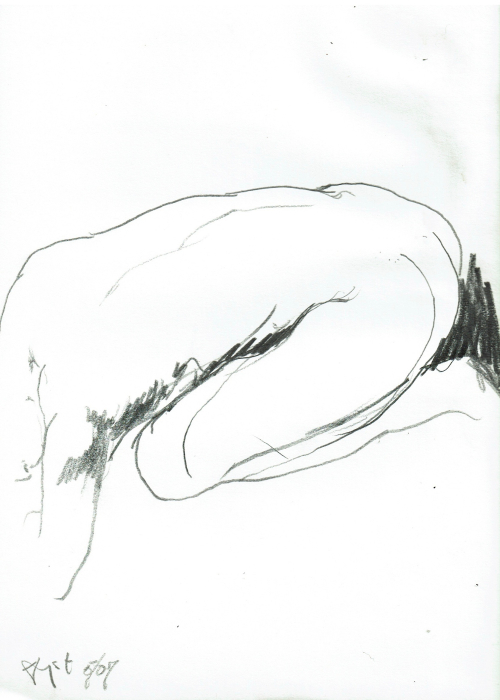 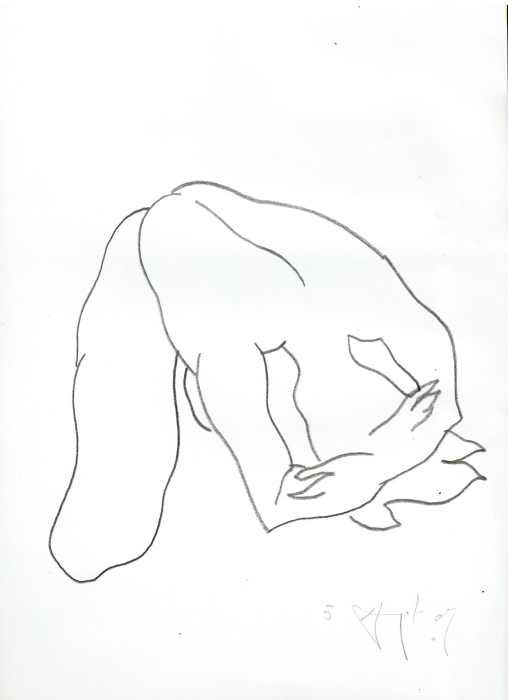 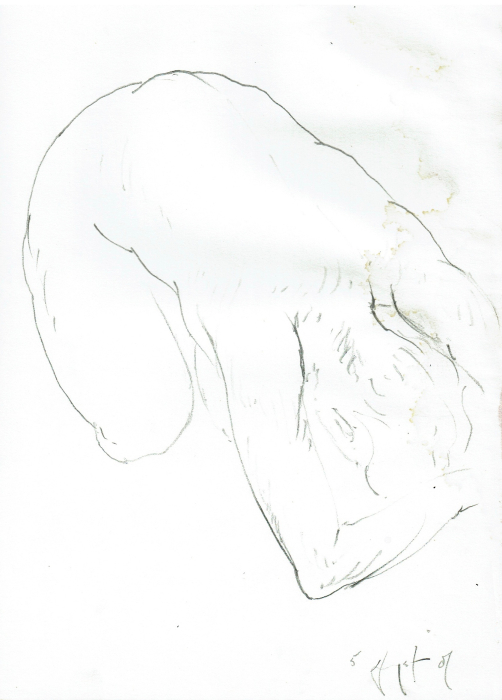 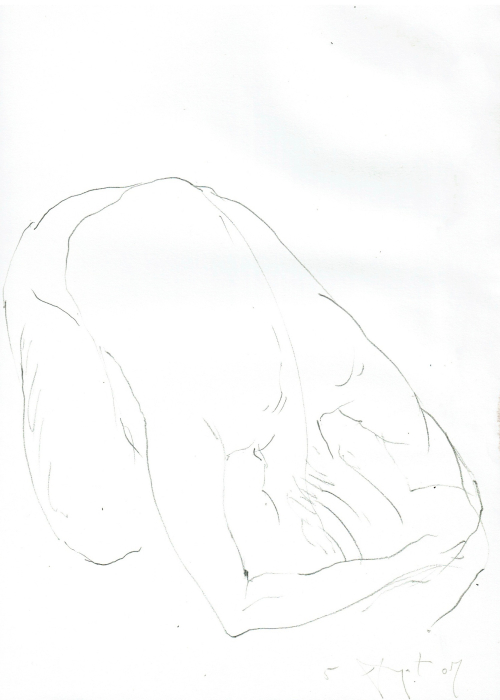 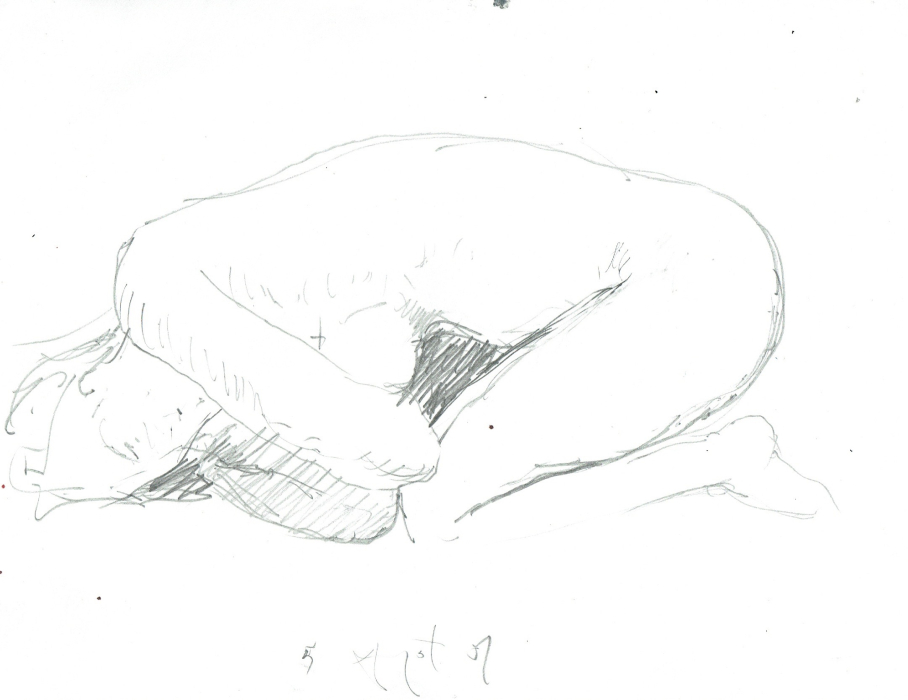 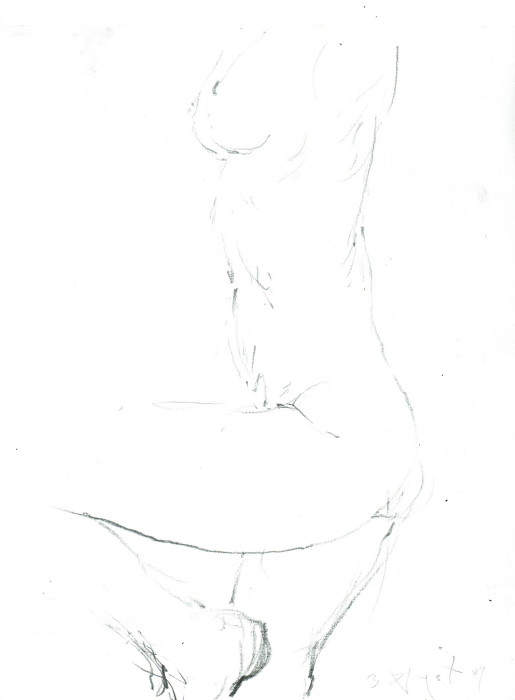 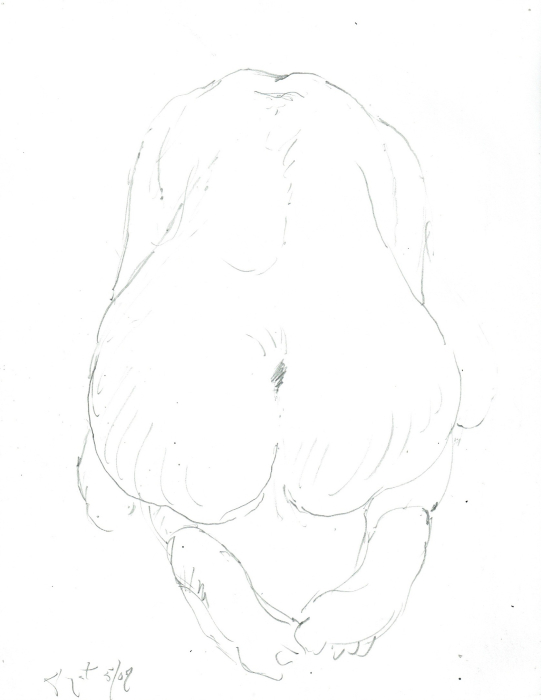 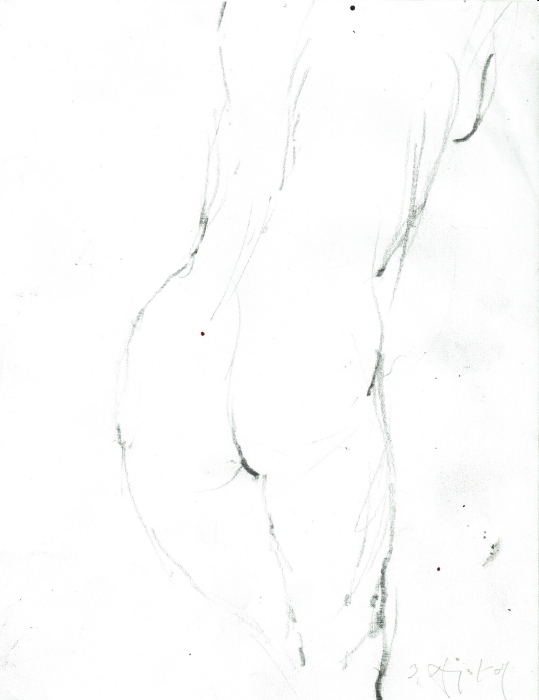 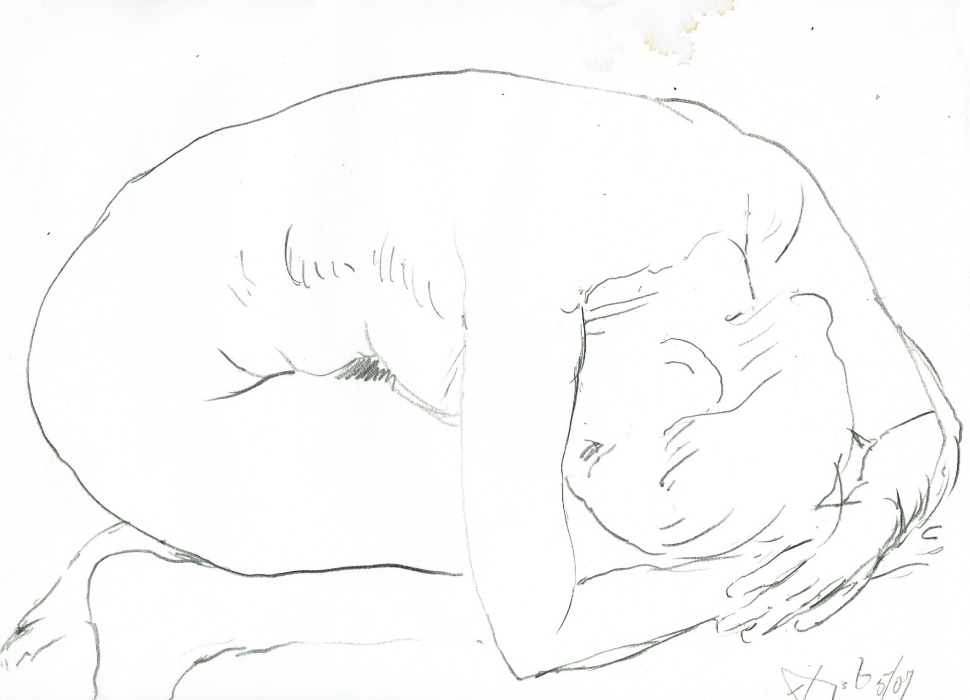 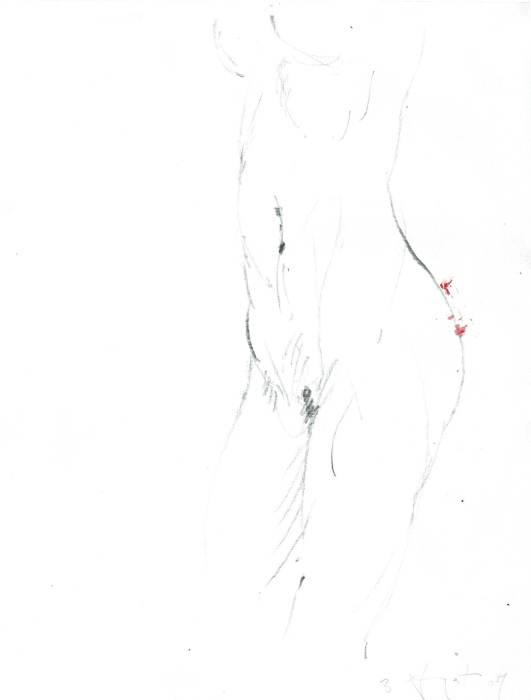 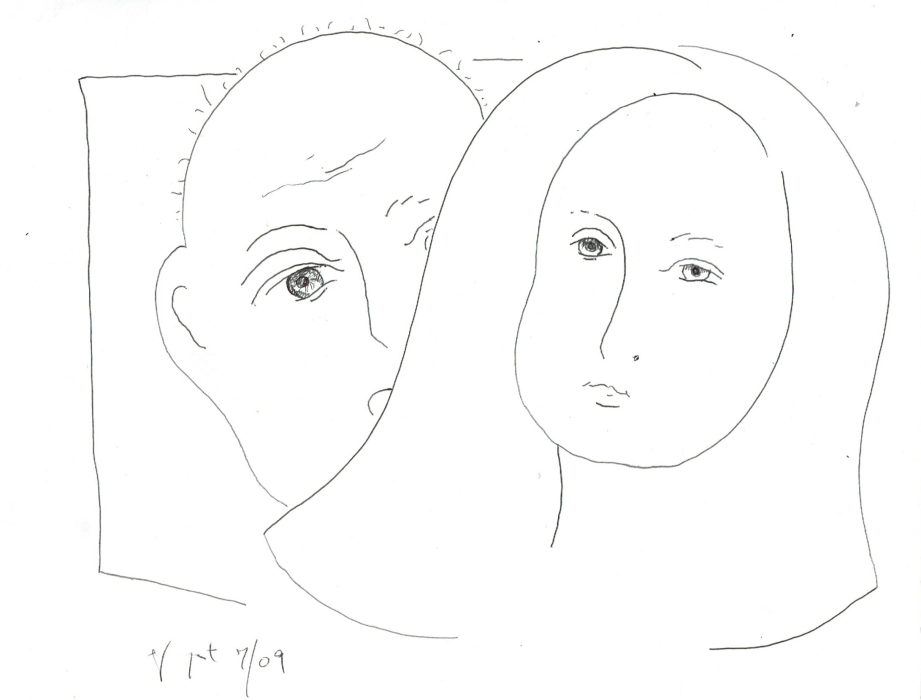 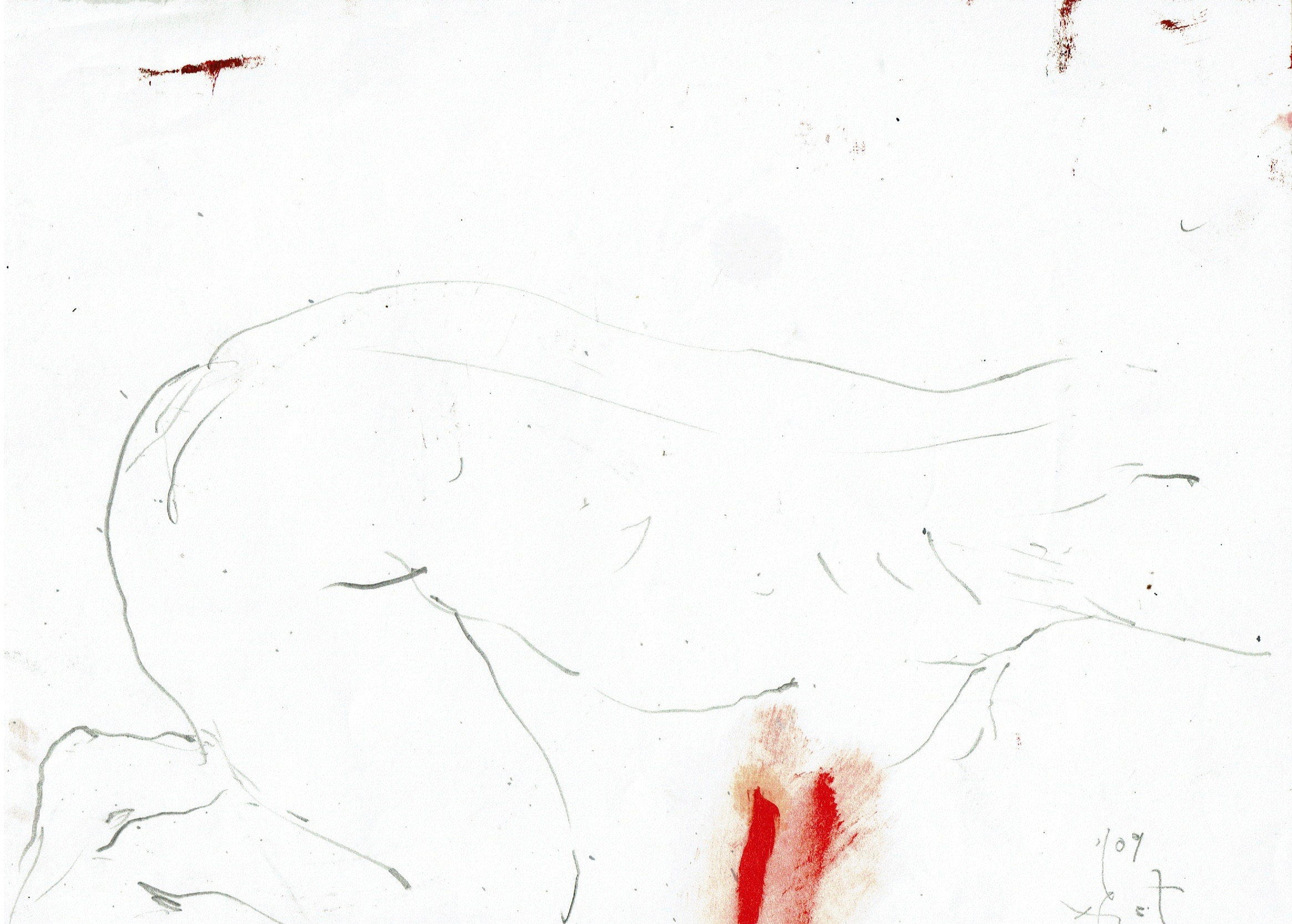 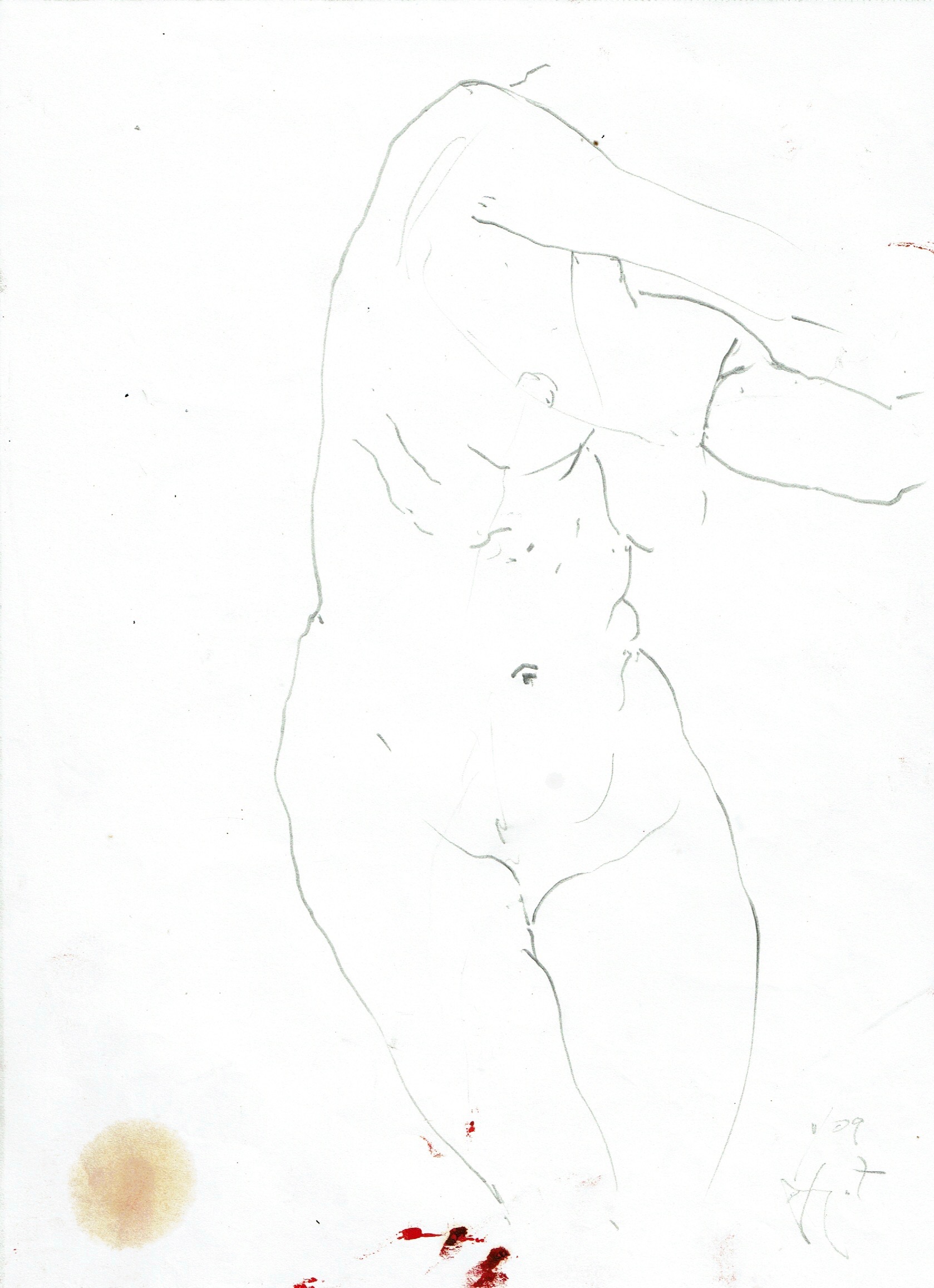 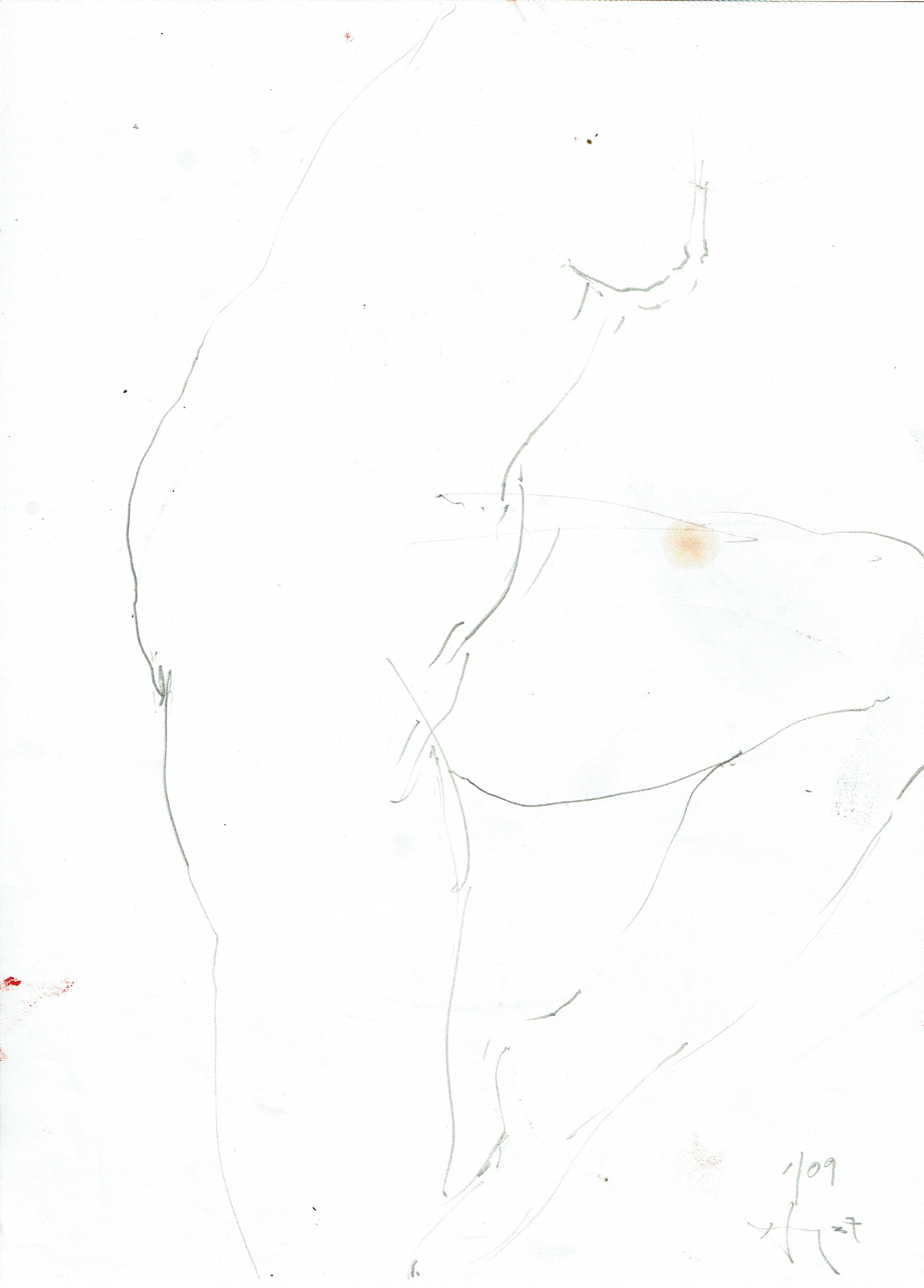