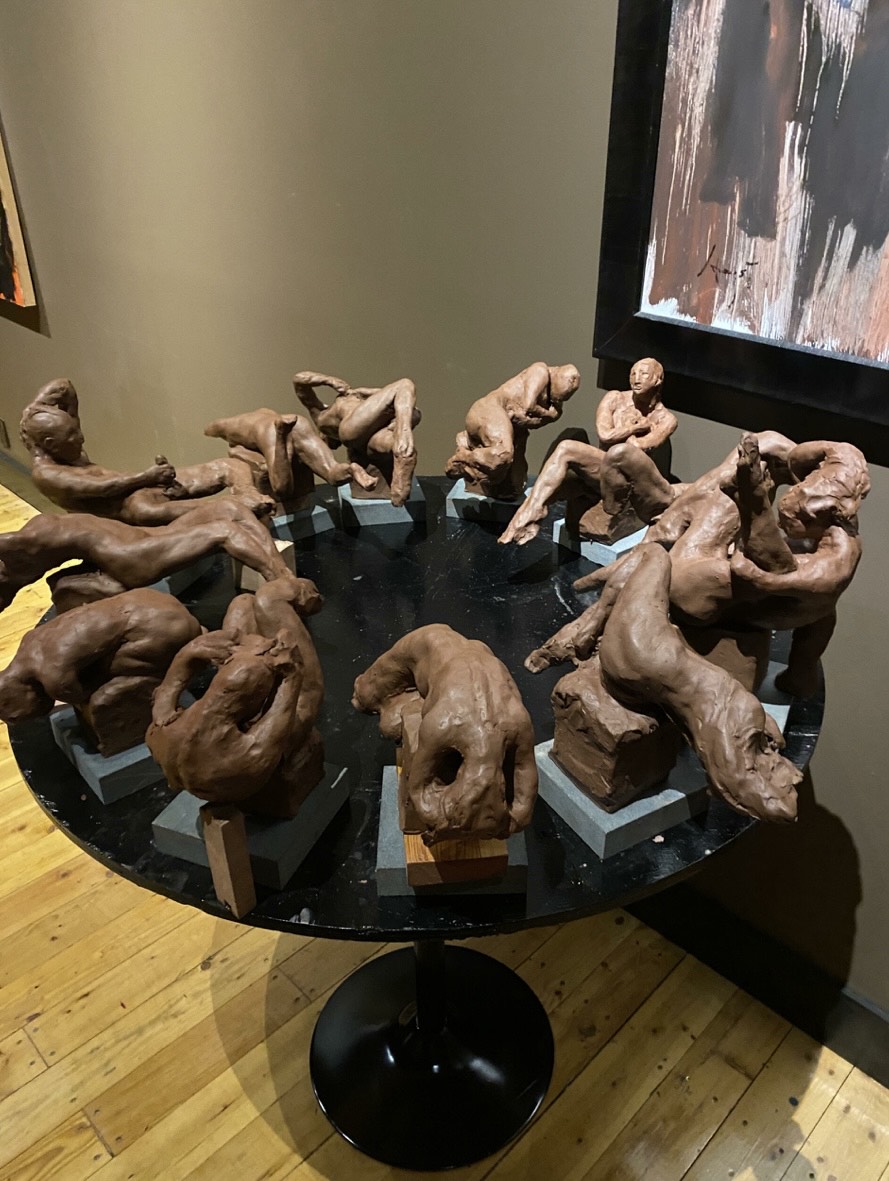 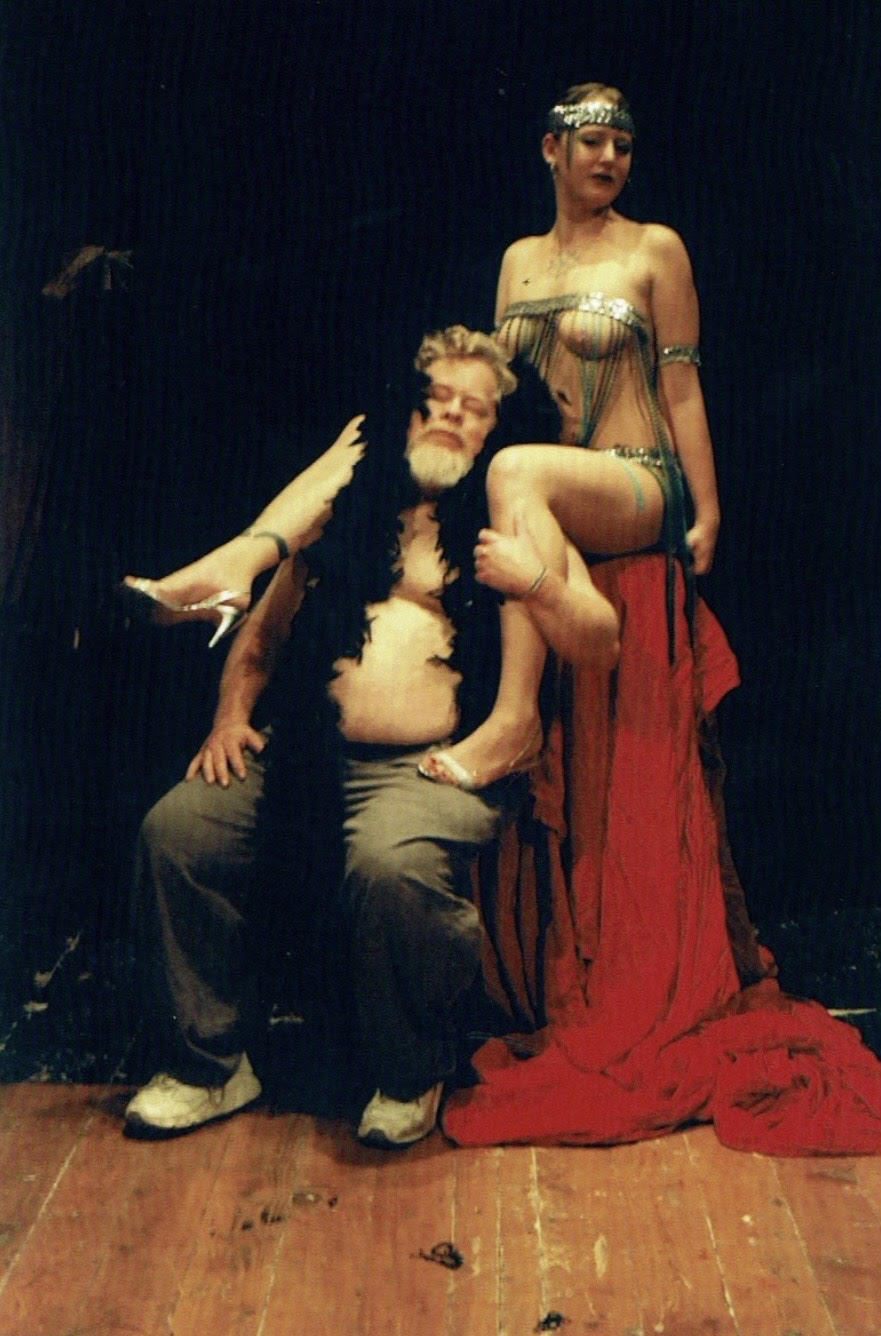 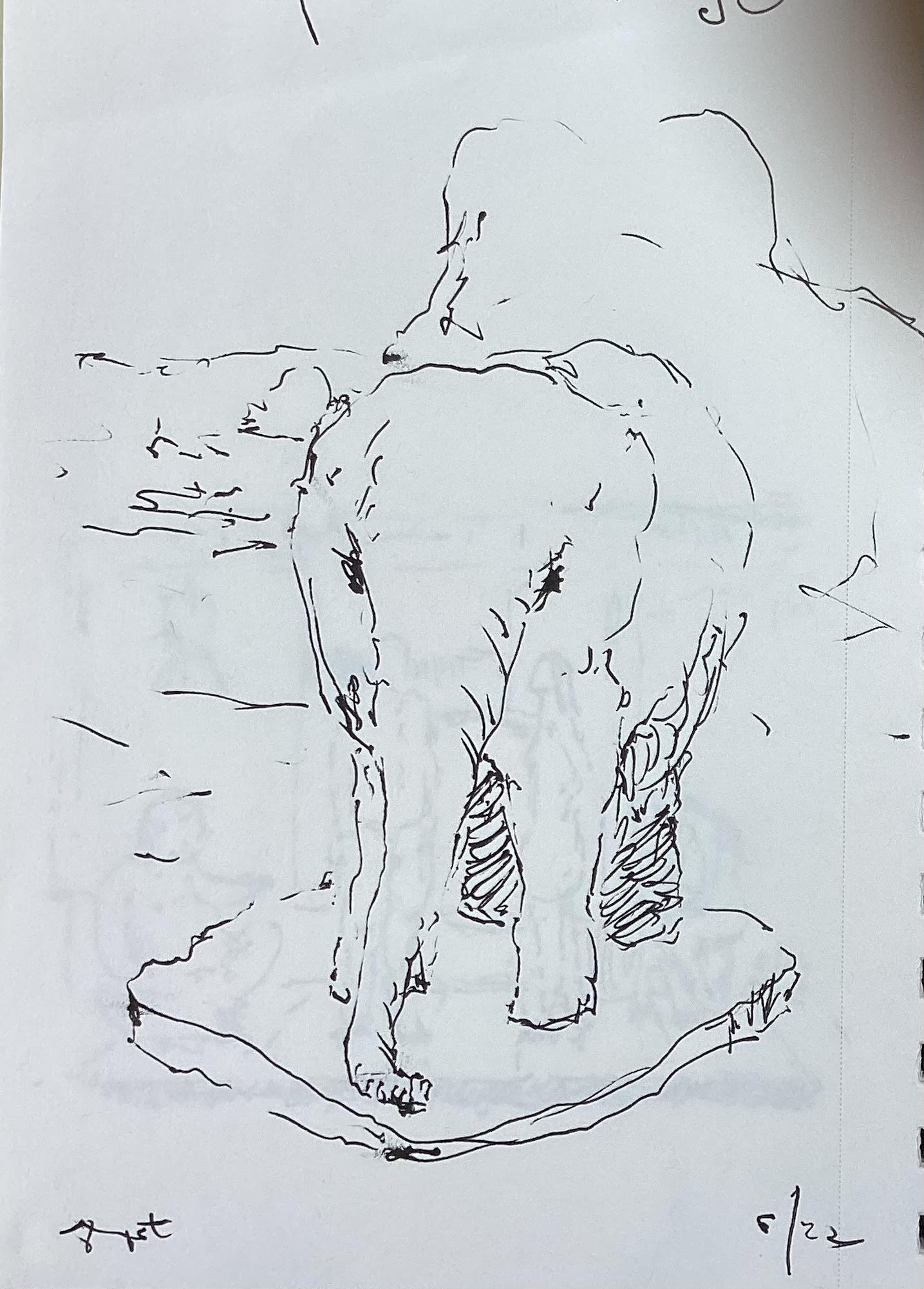 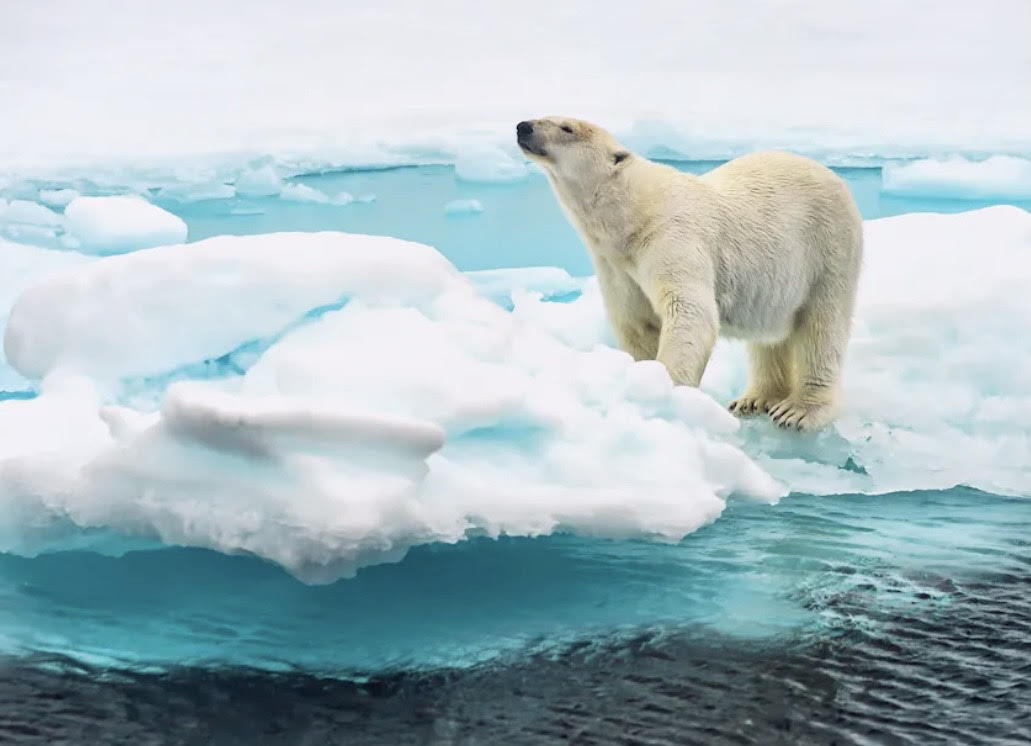 “Elephant on Ice”
Probably 8’ x 6”
Canvas
Completed. Please see “Figurative 2021-2022”.
A lone polar bear stranded on a melting piece of ice in the middle of a deep blue sea has become the poster child of climate change.   And why not?    The oceans are warming and this is destroying the habitat of these magnificent creatures.  And, since they are both so cute and so terrifying they are definitely great eye catchers and attention getters.
That is why an elephant on a chunk of melting ice is such a good idea.  Elephants are also threatened by the ways of humankind.  And elephants are also great poster children.  They get attention.  But I would argue they are even more interesting to most people than  polar bears.   Humans have a long complex relationship with elephants. We hunt them for trophies. We venerate them as gods.  We think of them as almost human in their intelligence and social skills.
And like polar bears and melting ice caps, their decline is a very visible sign of climate change.   So why not put one on a melting pedestal.
Am I making any comment about a melting Republican Party……hmmmmmm….I’ll need to give that more thought.
“Woman”
Ideally 10’ high
Wood.  Preferably a dark hard wood.
Hopefully soon.
When I did an internet search for “large nude female sculpture” I found pages of smallish and decidedly kitch statuettes.   There were a few classical pieces from antiquity sprinkled in with mass produced pour cast garden statuary.  And even an occasional monstrosity, but nothing anywhere near as serious and relevant as what I am proposing.
It has always bothered me that Michelangelo’s “David” has no serious female counterpart.  His “david” is noteworthy to me in the subject, the scale and the psychological complexity.   In the Bible David is from a race of people overpowered by a dominate race that threatens genocide on the Jews.   And even though the sculpture is nearly a colossus, In the story he is small compared to his opponent, Goliath.  And unlike most depictions of David seen victorious over Goliath’s dead body, here we see David steeling himself for the confrontation, the very picture of reason and mind over brute strength.   And so beautifully done you can not take your eyes off it.
Well, I want to carve a larger than life size Black woman who girds herself for battle against a culture that threatens her for the same reason Goliath threatened David and his people, because of his race and culture and beliefs.  She doesn’t have a weapon like David who incidentally does have a weapon, a sling, but it is so small it’s only real purpose in the statue is an iconographic necessity.  No, her weapon is her body and more specifically, the way her mind and soul animate her body.  Her defiance, her compassion.  Her intellect and soul fullness.
I will borrow heavily from Michelangelo and as he did, the ancient Greeks for similar reasons, that intuitively we all understand that the nude when presented with noble intentions is the most powerful way to present the dignity and power of the individual and the integration of reason and passion.  It is, in the visual arts, the most powerful form of harmony.  There are moments throughout Western Art where this thread of the noble nude pops up….and in between is a lot of pornography and kitch.   Nothing wrong with pornography and kitch.   But it’s not the same.
Unlike Michelangelo’s “David” my statue will be carved to be seen in the round rather than from one position, the front.   This is significant because it implies a smoother flow of one part to another rather than the more distinctive open and shut compartmentalization of
“David.”   And mine will be carved in wood rather than stone.  Wood is organic and closer to a living organism than marble which to be sure also has a life force.  But the sculpting itself will be faster and that will change the way the parts move and flow into each other the way the views will as one moves around the piece.
Even though she will be wood, which has more tinsel strength than stone, she will need something that strengthens the connection of her body to the plinth that she stands on.   In Michelangelo’s piece there is a tree stump that fulfills this purpose and also adds both an erotic touch as well as augers for Christ’s death on the cross….David is part of the lineage that leads to Christ.
I’m not sure yet what my women will have to strengthen her as well as advance the concept.
My next step is to create a near life size version in some forgiving material such as clay or softwood.   At that scale I can work out some additional details.   She will be in contra-posto.   And she will be looking down slightly.  She will also have dreadlocks   She will also probably be wearing some kind of jewelry since her weapon is her culture expressed mainly through her body.   But a necklace or hair adornment could add something without diminishing her singular purpose.
And like “David” she will not be shy about her sexual power, expressed like David through its matter-of-factness rather than something exaggerated or affected.
And finally, she will be older than David.   David is a youth about to blossom into manhood.   My woman will be fully in her womanhood. 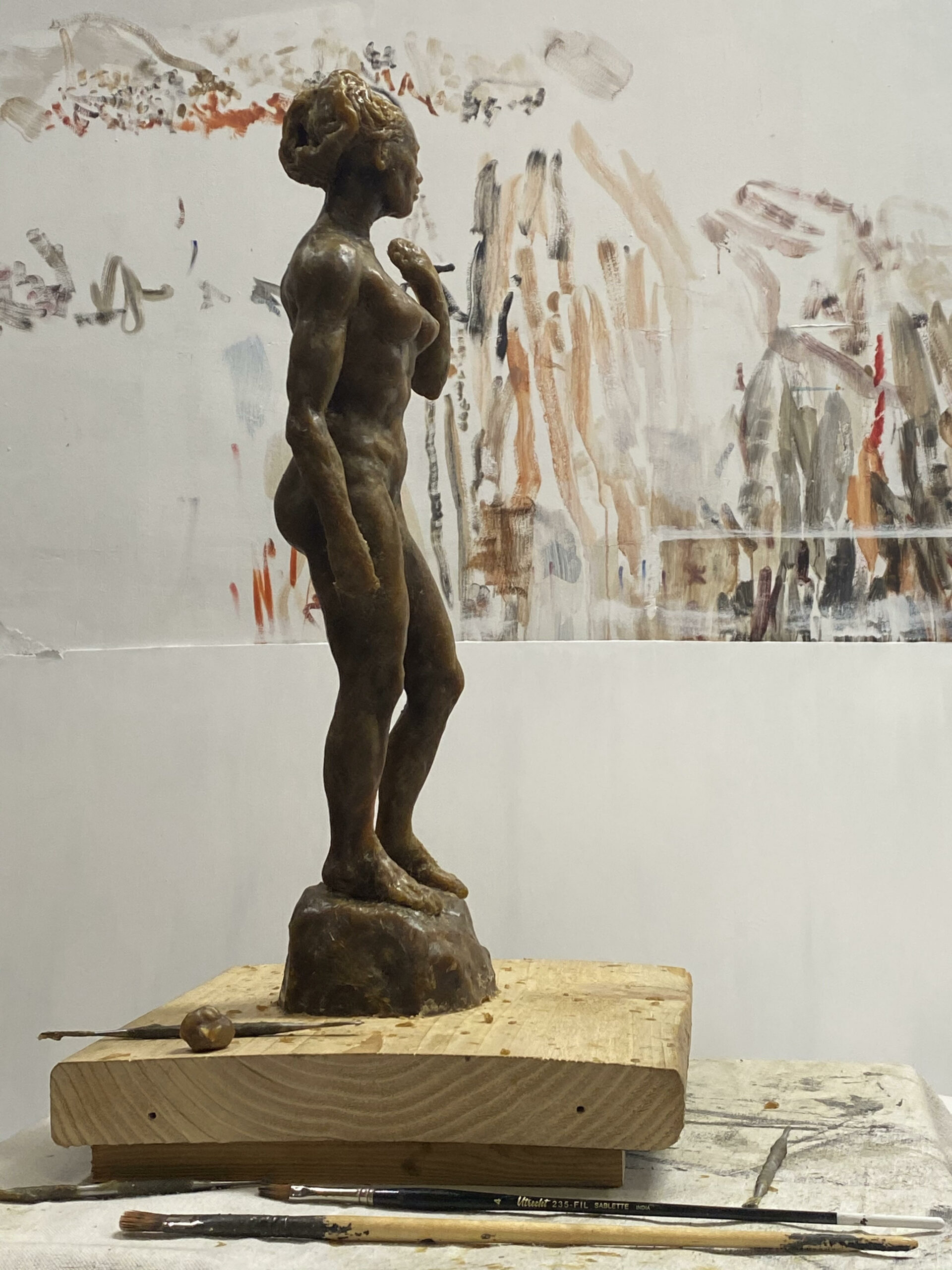 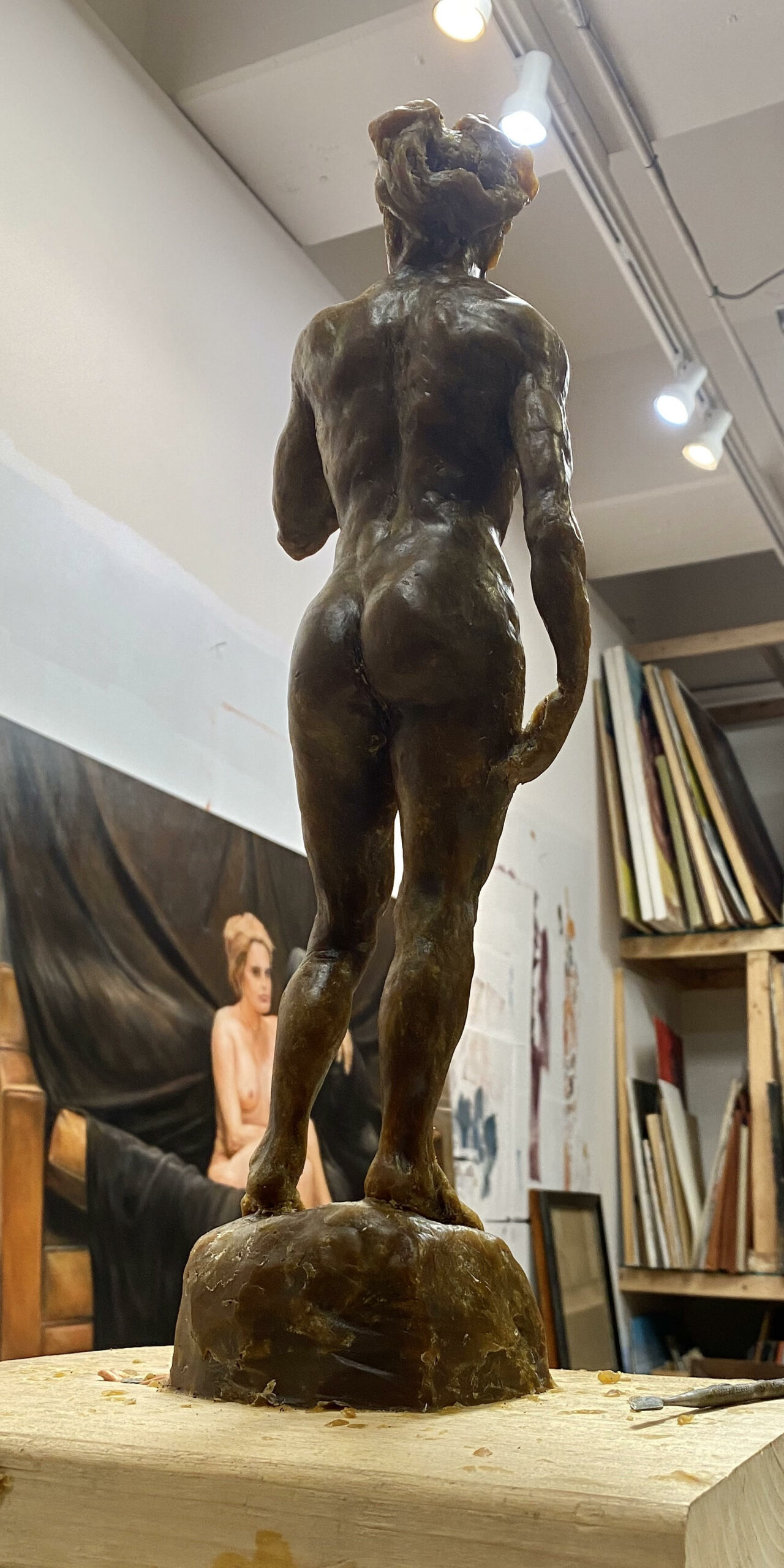 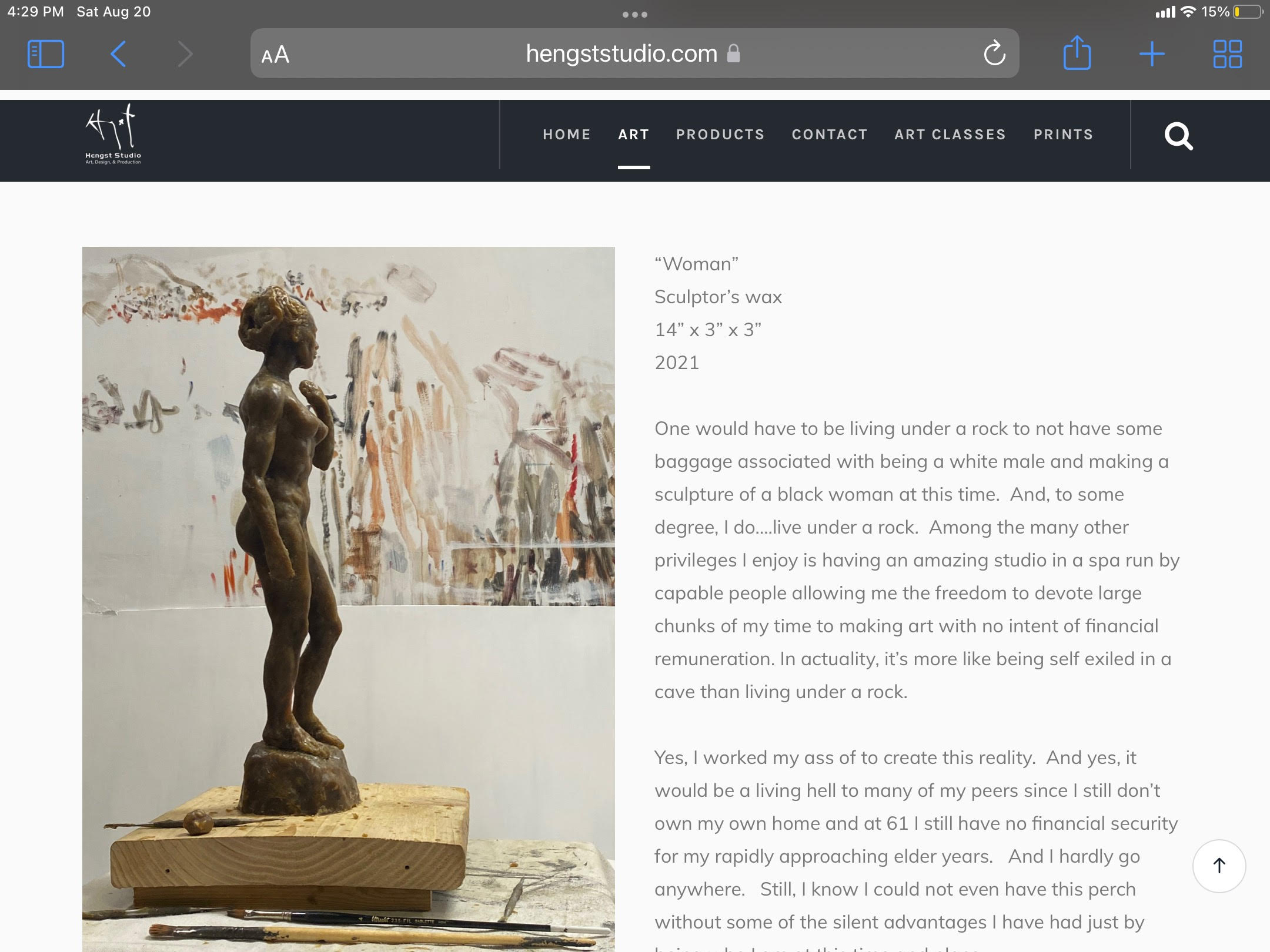 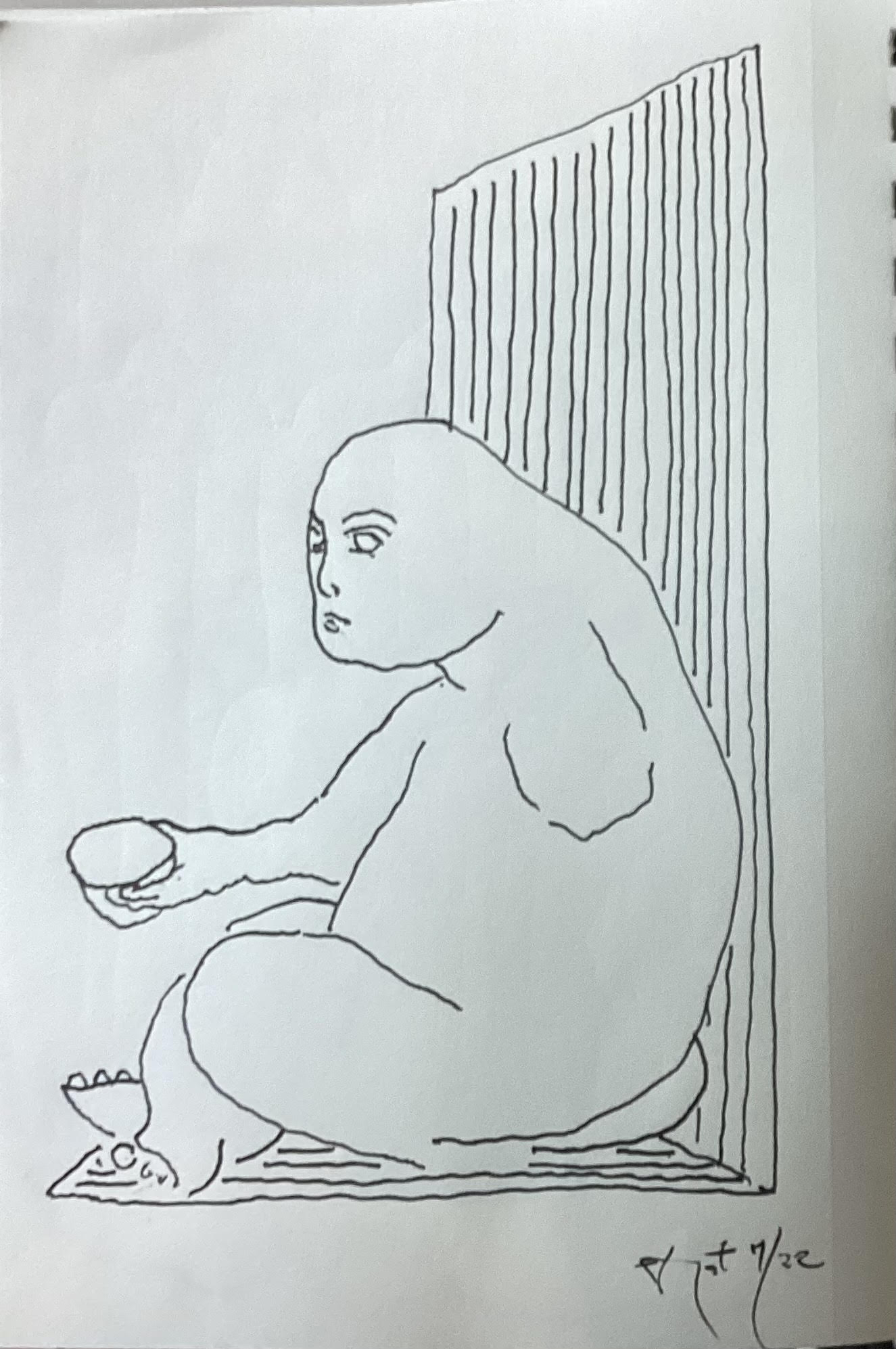 “Clarity and Purchase”
Various media
2022
There is a body of my work that a friend calls “mythic figurative.”    I’ve always liked that moniker.   It seems right.  This body of my work is not central but runs almost constantly in the background in my sketches.  I don’t sketch everyday, but nearly so.  And then, every so often, I do a bunch of paintings inspired by these explorations.
Recently my sketches look like I am thinking a lot about the relationship between charity and profit or the difference between charity and purchase.    Here are a bunch of photographs of my sketch book done in late July early August during my trip to Thailand, Cambodia and Indonesia.  When I return to Seattle I intend to explore these ideas in paint. 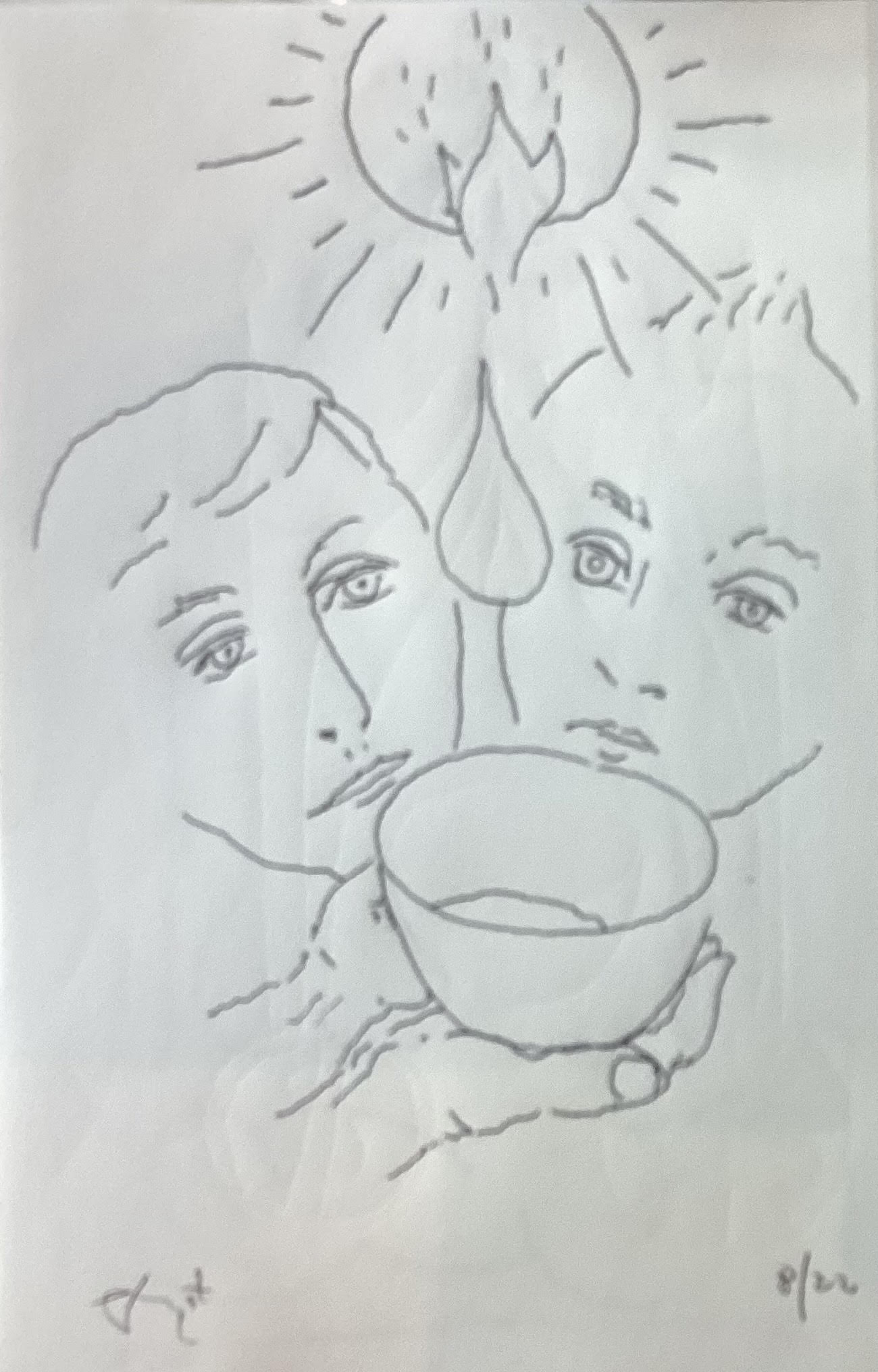 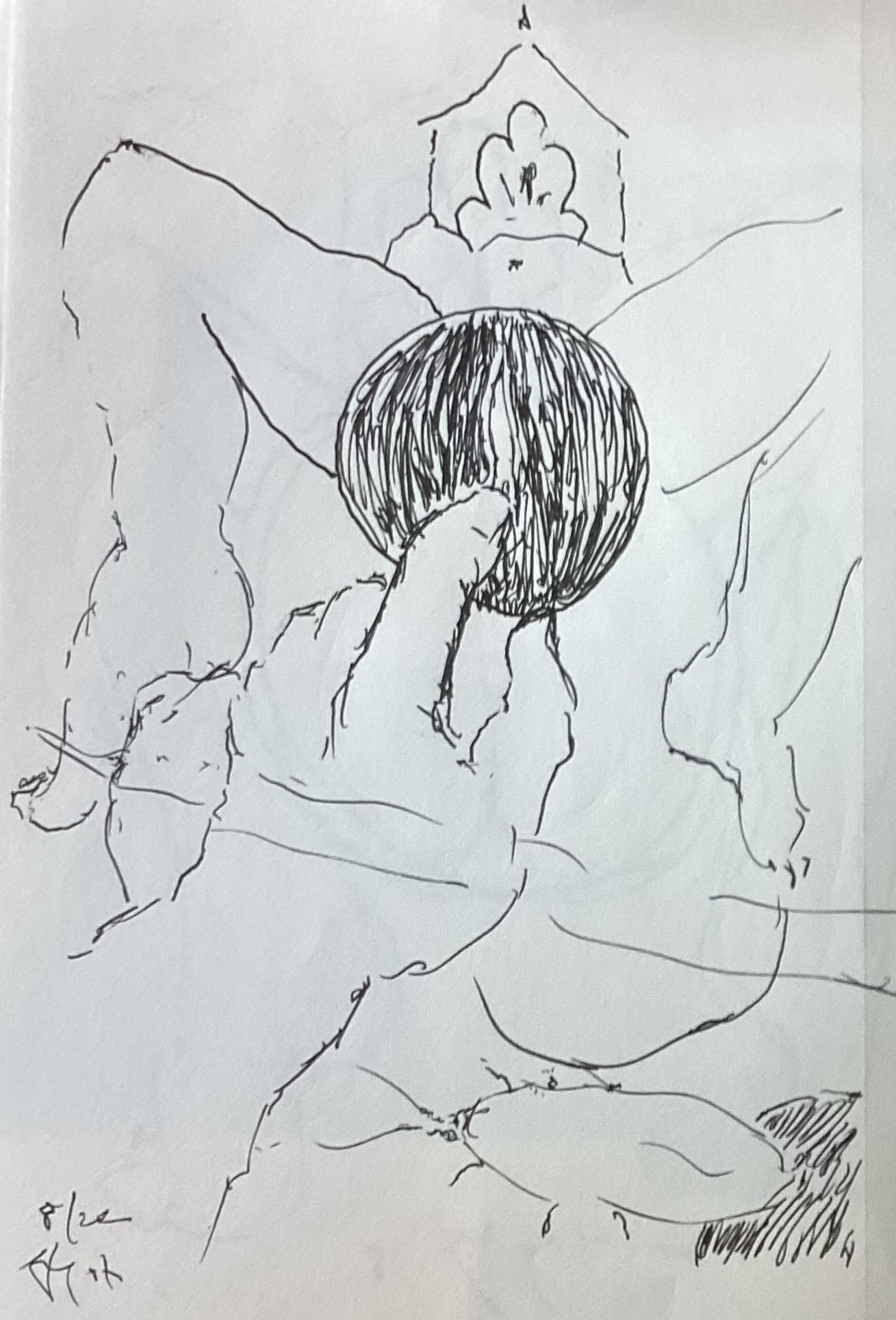 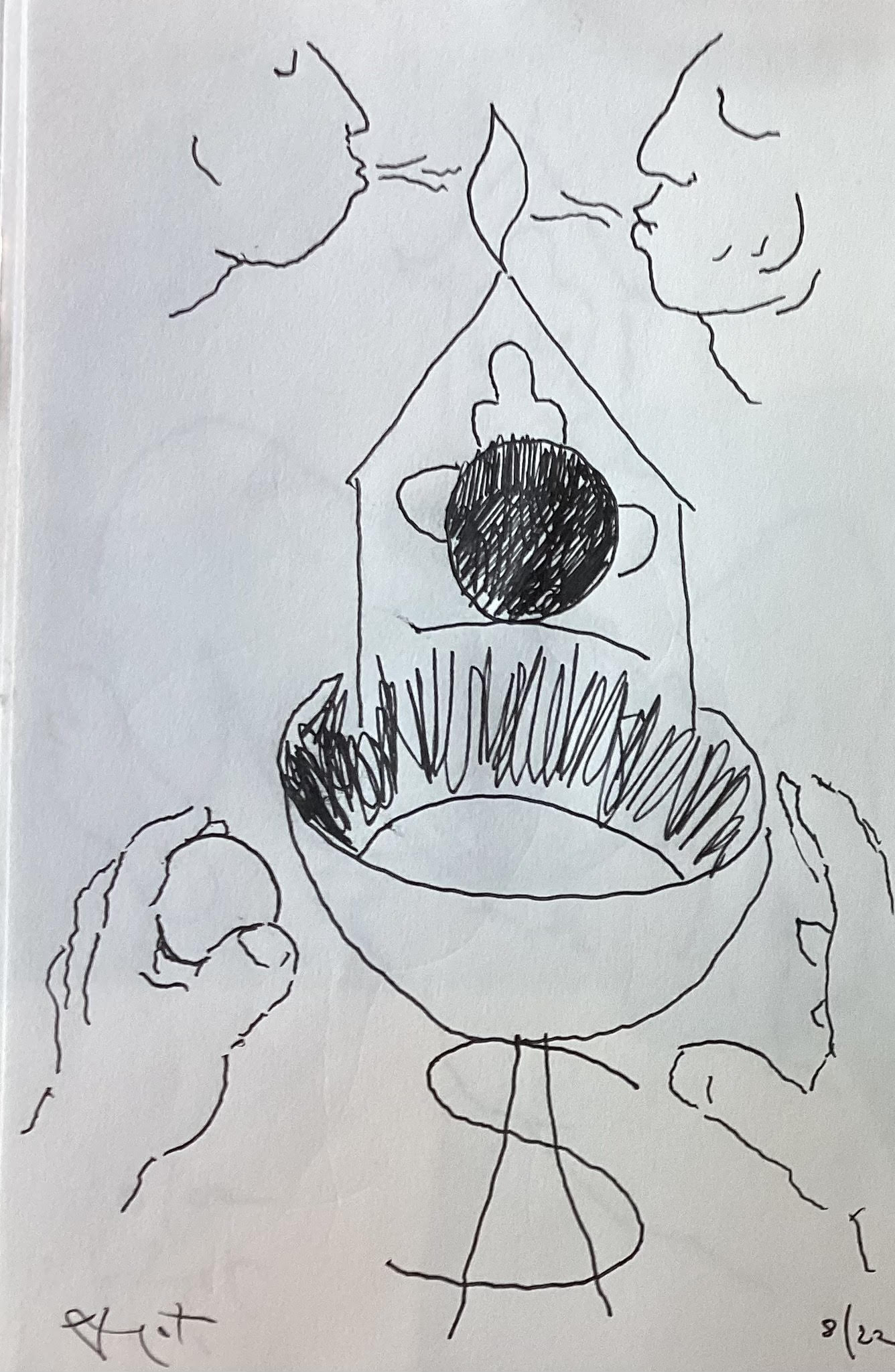 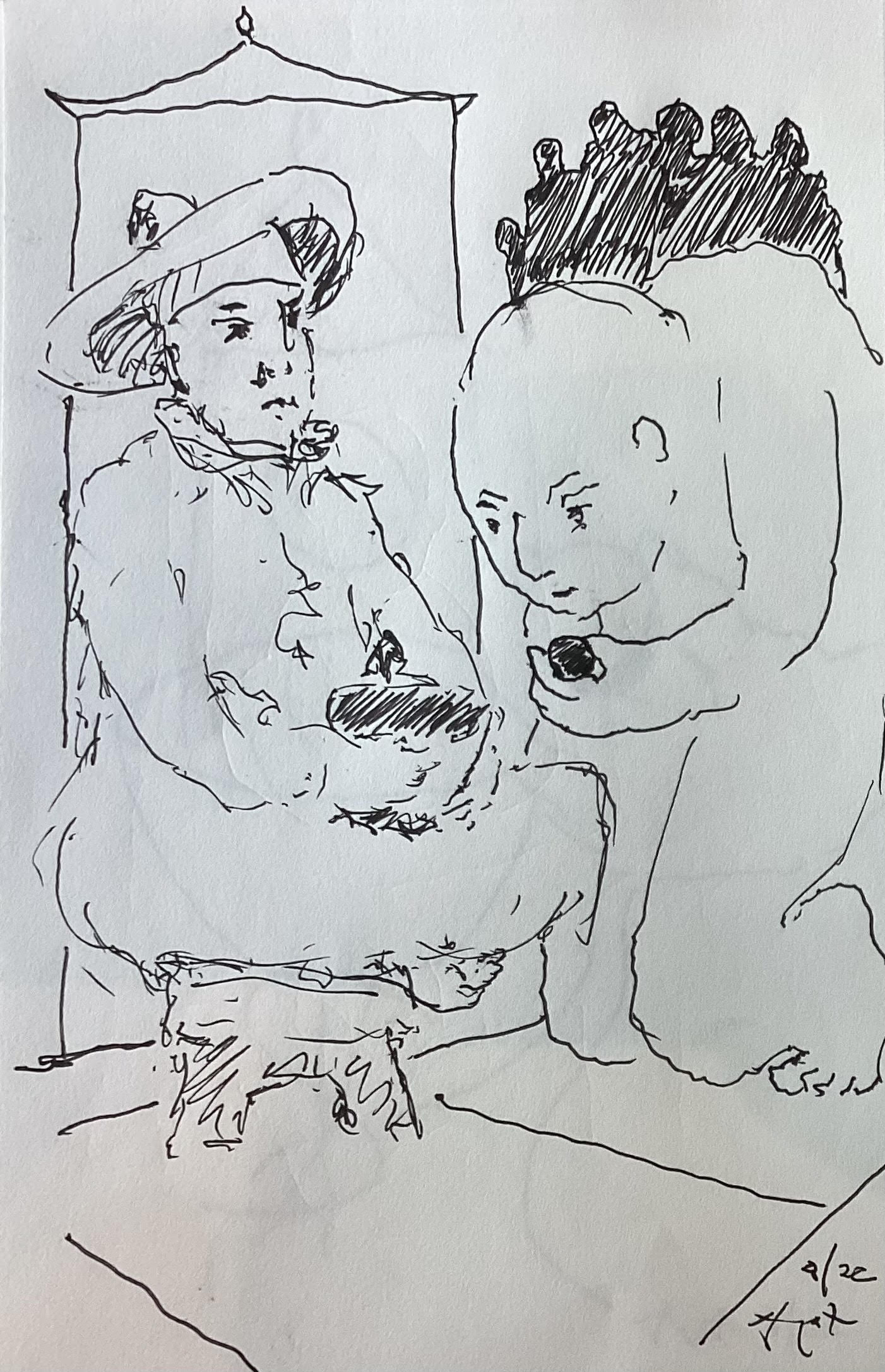 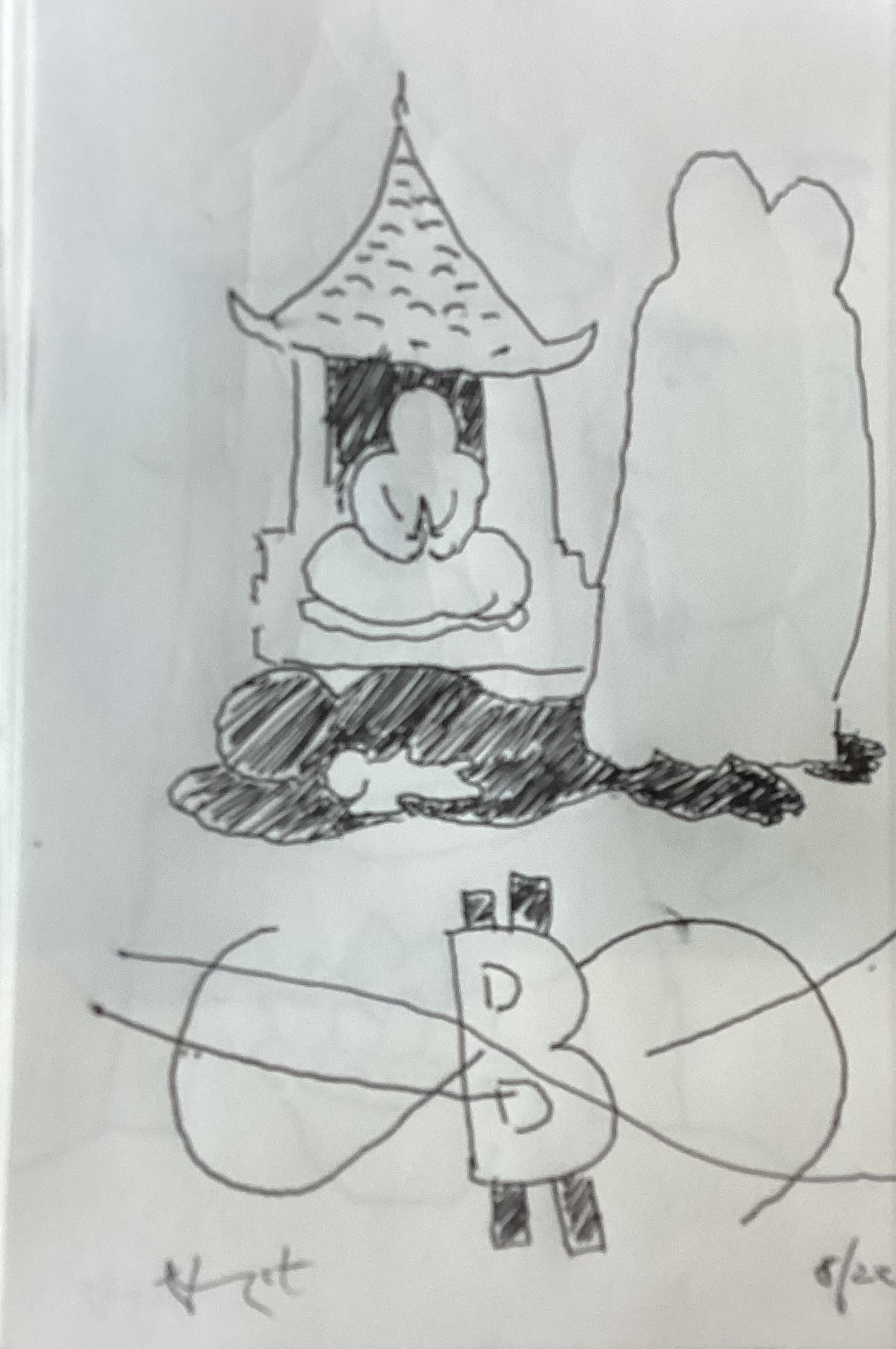 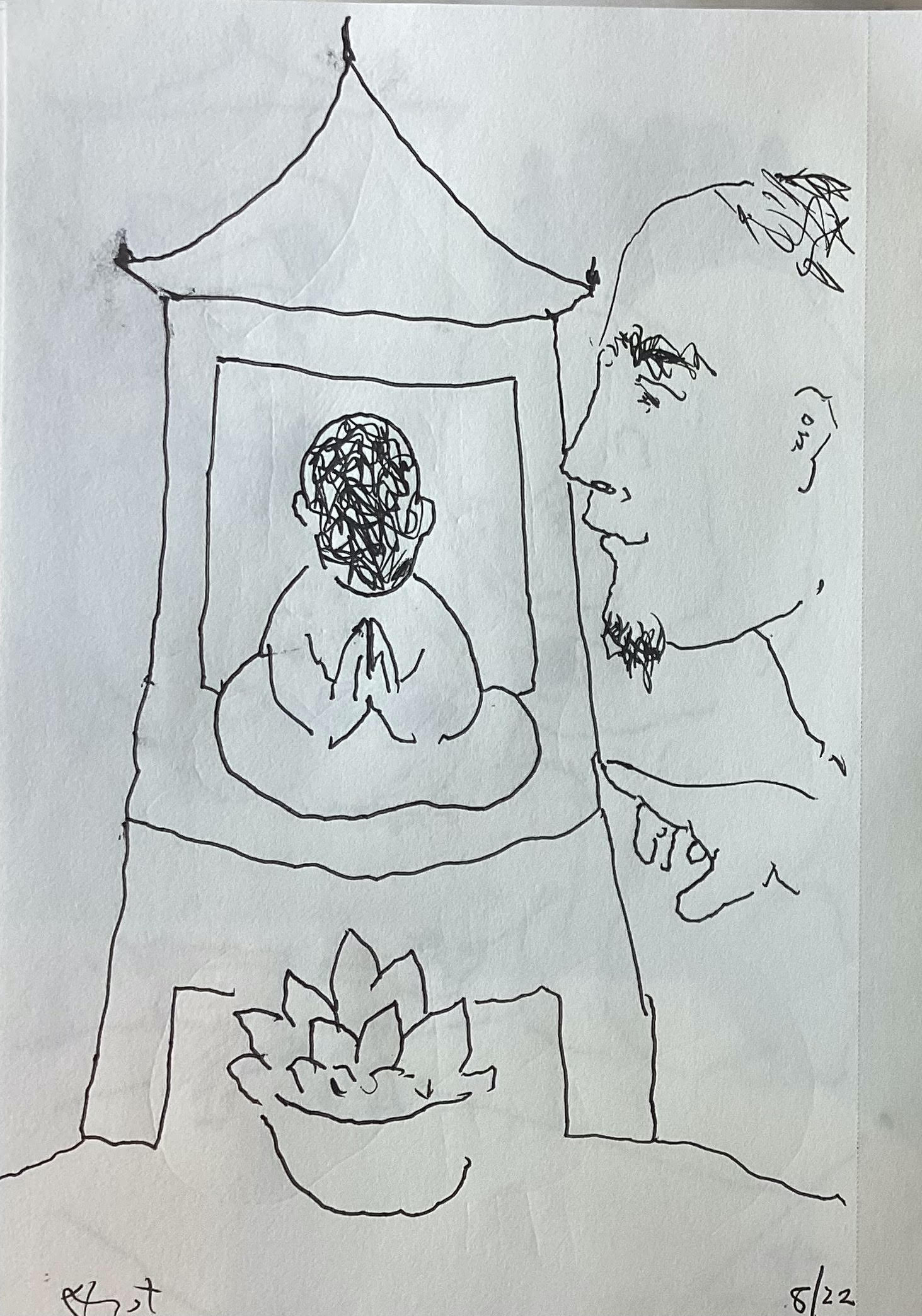